In December 1677, the Norwich Mayor’s Court granted Elizabeth Soane a licence ‘to make shew of a Motion Called Fayre Rosamond until further order’.¹ Now here, finally, we have a clear reference to a well-known story. This play or ‘Motion’ must have recounted the life and death of one of England’s most famous royal mistresses, a surprisingly crowded field.

‘Fair Rosamund’ was a woman named Rosamund Clifford (d. 1176?), a mistress to Henry II and subject of innumerable legends. Various tales claimed that that the king built a palace and labyrinth at Woodstock for her, that she was mother to an Archbishop of York and the Earl of Salisbury, and that she was poisoned by the queen, Eleanor of Aquitaine. Sadly, none of these seem to be true.²

Nonetheless, her relationship with the king was real enough. She was buried at Godstow Abbey (Oxfordshire) and, thanks to the king’s gifts, laid to rest

in a magnificent tomb adorned with hangings, lamps, and wax candles, and set in the middle of the church choir in front of the high altar

An outraged visiting bishop had her reburied outside the church soon after and John Speed later reported that Rosamund’s tomb was placed in the chapter house, inscribed with a cheeky rhyme:

By the time Speed was writing in the early seventeenth century, she was a well-known character in English popular culture. Thomas Doloney included ‘Fair Rosamund’ among his Strange histories, or, Songs and sonnets, of kinges, princes, dukes, lords, ladyes, knights, and gentlemen… (1612). A melody by that name became popular enough to serve as a model ballad tune and allusions to her appear in several other broadsides. The Pepys collection includes a ballad dating from c.1686-8 entitled A Lamentable Ballad of Fair Rosamond, King Henry the Second’s Concubine, Who was put to death by Queen Elinor. It recounts her legendary life in magnificent detail: her ‘Peerless’ beauty, the extraordinary ‘Bower’ at Woodstock, a knightly guardian and murderously jealous queen. It is, one must admit, an exciting tale.

Many more versions followed in the eighteenth century, such as a cheap anonymous eight-page chapbook called The Unfortunate Concubine, or, Rosamund’s Overthrow (Tewkesbury, [1775?]). Unsurprisingly, her romantic story was taken up several decades later by the men of the Pre-Raphaelite Brotherhood such as Dante Gabriel Rossetti (see above) and later John William Waterhouse. 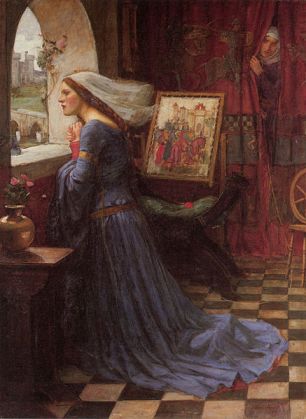 One thing is certain: this was a story with remarkable staying power. Although it would be nice to know more about the circumstances of Elizabeth Soane’s production in 1677, if the history of the tale is any indication it may well have been a hit. I don’t really go in for the ‘royal romance and intrigue’ type of history, but apparently some seventeenth-century East Anglians did, and recent adaptations suggest that Rosamund continues to fascinate twenty-first century readers as well.

² Most of the biographical information comes from T. A. Archer, ‘Clifford, Rosamund (b. before 1140?, d. 1175/6)’, rev. Elizabeth Hallam, in Oxford Dictionary of National Biography (Oxford University Press, 2004). Much of it is also included on her Wikipedia page.

8 thoughts on “Norwich Entertainments – Part III: A medieval royal mistress in the 17th century and beyond”