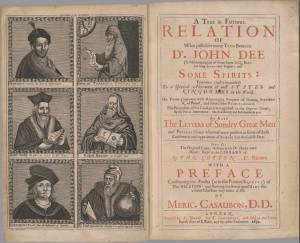 Sections of Dee’s record of his conversations with angels were published by Protestant minister Meric Casaubon in 1659.

Elizabethan John Dee had some very clear answers to these questions, as is evident from the records he left us of hundreds of conversations conducted with angels between 1583 and 1587. The earliest record of his angelic conferences is prefaced by a prayer in which he outlined his motivation. He confessed how he had prayed since his youth for ‘pure and sound wisdom and understanding of your [God’s] truths natural and artificial’, truths which were to be used for the honour of god and the benefit of humankind. However, although he had studied long and hard, in many books and places, and conferred with many men, he had become disillusioned with conventional routes to knowledge and what he called ‘vulgar scholar’. His lifelong struggle to acquire a universal wisdom from dogged researches in mathematics, astrology, optics, geography, navigation, history and other disciplines had not yielded the results that he was hoping for – true wisdom remained elusive. All was not lost though, as Dee came to the conclusion that there was another way to attain the better understanding that he sought, and that was through direct consultation with angels.

Botticini’s ‘Assumption of the Virign’ (1475) depicts the 3 orders of the angelic hierarchy in all their glory.

Early modern folk understood that angels were the next step down from God in the universal hierarchy, and this nearness meant that they were endued with a special knowledge, much superior to the cloudy understanding of mankind. Dee knew that in the past God had sent his angels to men like Enoch and Moses, to ‘satisfy their desires, dowtes and questions of thy secrets’, giving them access to this true wisdom that had originally come directly from God. Conversations with angels therefore had a firm scriptural precedent, and could give man access to an ancient esoteric wisdom that had originally been communicated to Adam, but which had been lost and forgotten over the course of human history. The arts of divination and magic were fragments of this original, pristine knowledge, and the angels had the potential to fill in the missing gaps. Dee’s reasons for conversing with angels were therefore, in his mind, spiritually and intellectually sound. They were the culmination of his lifelong efforts to decipher the book of nature and to discover a universal science that could bridge the gap between heavenly wisdom and faulty human perception. His dialogues were designed to build a Jacob’s ladder to the other world. Importantly, as well as seeking this recondite knowledge, Dee was also looking for signs of his own salvation, as every good Protestant should, and he thought that his conversations were proof that he and his assistant (or scryer) were, like Enoch and Moses, the specially chosen recipients of divine knowledge. For Dee, his actions were thus a type of religious experience sanctioned by scriptural precedence.

The practicalities of Dee’s conversations reinforce this idea. The ceremonies began in the simple religious atmosphere of an oratory, a chamber in Dee’s house that had been set aside for the purpose of conducting the conversations. He and his scryer, Edward Kelly, began with a period of silent prayer. Most often Dee would humbly petition God to send his angels, addressing God and Jesus as the embodiment of wisdom, and asking that Dee and Kelly be worthy of divine aid in understanding. Dee was acutely aware of this need to be worthy, he placed great emphasis on approaching the conversations in a proper spirit of piety, and the angels themselves delivered frequent homilies on Dee and Kelly’s sins, the nature of salvation, and the necessity of complete obedience to God as a prerequisite of receiving the whole revelation. But unlike with medieval magic, initially there were no elaborate ritual preparations or ceremonies, no incantations, hymns, purifying fumigations, candles or talismans to attract the influences of the planetary angels. The one piece of magical apparatus that Dee and Kelly did have was a ‘shew-stone’ through which the scryer saw the visions of angels.

You can see the shew-stones and wax discs Dee used in his conversations at the British Museum.

Dee never saw or spoke to the angels himself, they appeared to Kelly, who related the information back to him – an angel told them that Kelly saw the angels ‘in sight’, whereas Dee could only see them ‘in faith’. The original shew-stone was probably a circular flat black mirror of polished obsidian, but there were several others, including one which was delivered by the angels themselves, as described by Dee:

I cam within 2 feet of it, I saw nowthing, then I saw like a shadow… on the ground.. hard by my books under the west window. The shadow was roundish, and less than the palm of my hand. I put my hand down upon it, and I felt a thing cold and hard, which taking up, I perceived to be the stone before mentioned.

The scrying stone was the bridge between the divine and earthly worlds. Over time, other new ritual elements began to creep into the conversations, bringing a greater ‘magical’ aura to proceedings. The angels gave direction for a table of practice decorated with various mystical symbols, and for a seal of God to be inscribed on wax discs which were then placed under the legs of the table and beneath the shew-stone on the table. 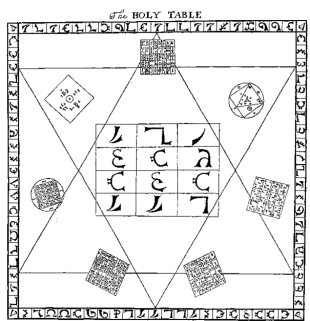 The holy table used in the conversations. The angels instructed Dee in its design.

So did it work? Did Dee achieve his aims? It certainly wasn’t a complete failure – numerous spirits appeared to Kelly and extensive conversations were conducted. Most often the visitors were the archangels Michael, Gabriel, Raphael and Urial, although another, Madimi was also a regular visitor. The apparitions appeared in a variety of guises: they might look like a young girl, or a husbandman in red apparel, a yellow haired women who was like an old maid, or on one occasion just like ‘a big tall creature’. During the conversations with these celestials, two main forms of knowledge were conveyed to Dee. Firstly, the angels provided many grid like tables purporting to be an angelic alphabet. 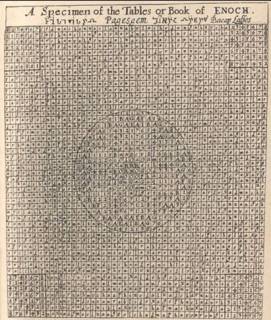 One of the grids relating to the angelic alphabet. The angels selected letters from the grids to make words and sentences.

This represented a divine language, which if mastered would allow Dee to know the true nature of all things. Secondly, the angels provided information about the names and responsibilities of the angels – the sections of the air that they ruled, the angelic tribes that they belonged to, and the number of subordinates that they controlled.

In the first Air: the ninth, eleventh, and seventh Angel of the Tribes, bear rule and govern. Unto the ninth, 7000. and 200. and 9 ministering Angels are subject…. The whole sum of this Government amounteth to 14931

This information about the angelic hierarchy would eventually give Dee command over the angels and would allow him to participate in the society of angels. Unfortunately for Dee, his attempt to use religious magic as a means to ascend up the universal hierarchy was ultimately a failure. The angelic language and spiritual hierarchies that he learned from the angels were not the pristine knowledge that he sought, they were just the means to access that knowledge, and the language and hierarchy were only partially complete in any case. Dee went to his grave without having unlocked the secrets of nature, though fortunately for us he recorded his endeavours in great detail, giving us an insight into the pious, rational, yet strange and alien world of the Elizabethan intellectual elite.

Want to know more? [*endorsement alert*] I discuss many of the other beliefs associated with angels in my recent book. If you want to know more about John Dee try these: