This is the first in a week long series of posts about a new exhibition at Exeter’s museum. 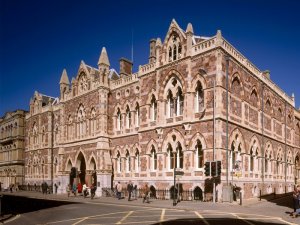 I few weeks ago I had the pleasure of visiting a wonderful new exhibition at Exeter’s recently refurbished Royal Albert Memorial Museum. Titled ‘West Country to World’s End: the South West in the Tudor Age’, the publicity describes it as ‘celebrating the spirit of adventure and enterprise of south west people’ during the Elizabethan ‘Golden Age’. Along with some of my first and second year undergraduates, I was also lucky enough to attend a talking tour of the exhibition by one of its curators: Sam Smiles, Professor of Art History and Visual Culture at the University of Exeter. It was an intriguing insight into the thought and planning that goes into such a project, and I was struck by how carefully constructed museum exhibitions are in order to allow viewers to assemble a history from the objects themselves. It led me to reflect on the way that the selection, juxtaposition and display of the objects prompts the viewer to make associations and identify themes, leading to their greater understanding of the period and the subject. The exhibition runs until 2 March 2014, and each day this week I will be offering some thoughts on objects from the exhibition, explaining what the items said to me and following up on the questions that they raised. Click on pictures for enlargements. 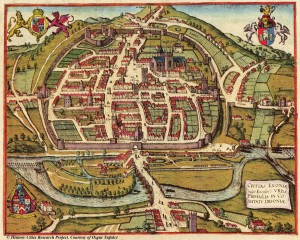 Engraving of Exeter by Hogenberg, 1587.

As a naturalised Exonian, I was very taken by the large scale reproduction of a map of Exeter as it was in 1587. Placed at the start of the exhibition it immediately orientates you within the early modern city, and it is fascinating for any number of reasons. The Exeter on the map has some familiar landmarks, yet the contours are not what are not what you expect: the river has been redirected in the centuries since, the castle and city walls have largely disappeared, and of course modern Exeter is far larger, incorporating parishes that were entirely separate in the early modern period and 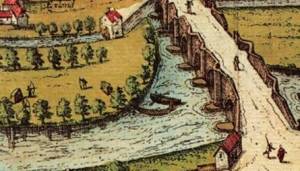 sprawling suburbs where once there was only farmland. The map is incredibly detailed – there are figures promenading in the streets and a couple of archers practise their skills by the Exe bridge, whilst the tenterhooks used in Exeter’s successful cloth trade are plain to see on the banks of the river. There are at least seven churches within the walls in addition to the huge cathedral, and everywhere there are wide green open spaces: a reminder that the Tudor urban environment was vastly different to our own. The map is hard to navigate for a modern too – the perspective allows the viewer to see the city in it’s entirety, but in doing so fails to indicate the very steep incline between the river and the city centre, so buildings that appear to be next to each other on the map are not experienced like that in reality.

Of course maps are never realistic in the way that they present their subject, they are designed to convey specific information to the map ‘reader’, thus the map designer chooses which aspects to emphasise and which to elide. The resulting distortion might 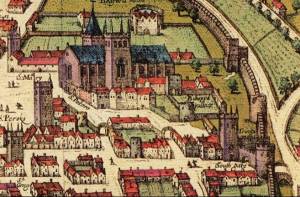 therefore tell us more about the producers’ perceptions and intent than the place they are depicting. Thus we do not see the city ‘as it actually was’, but rather we see what the producer (or patron) wants us to. This map was made for the great city atlas edited by Georg Braun and largely engraved by Franz Hogenberg, published in Cologne in six volumes 1572-1617. Many of the images in this post can be seen at ‘Historic Cities‘ which has excellent digital reproductions of city maps of the past, present and future. 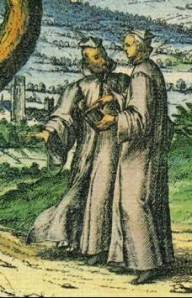 Braun and Hogenberg’s atlas contained 546 maps of cities, mainly European but there was also room for Mexico city and Casablanca. Other English cities included were London and the second city Norwich, Oxford and Cambridge, York, Canterbury, Chester and Bristol: the fact that Exeter was deemed worthy of inclusion alongside these indicates its important national status at the time. Hogenberg’s other city plans share features with Exeter’s –York is surrounded by a profusion of windmills, and in Norwich archers are also practicing their skills on the outskirts of town. There are differences too: Bristol, Cambridge and Norwich have sheep grazing in their hinterlands whilst in Exeter is surrounded by arable land, some of the maps have larger figures in contemporary dress in the foreground, indeed Oxford has what appear to be two scholars having an argument under a tree. 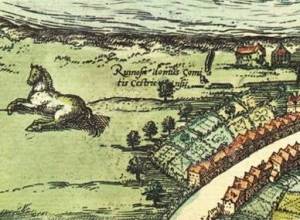 Either Chester was menaced by giant horses, or this map is not to scale.

The Exeter map thus tells me that Hogenberg saw the city as a Godly, thriving, well defended and well connected metropolis, relatively compact though already outgrowing the limits of it’s walls. The river was clearly a central part of it’s extensive trading and manufacturing activities, the water cluttered with boats and mills. A steady stream of people cross over the bridge towards the city gates, and within the walls there were some impressive houses suggesting wealthy citizens – this was a bustling regional centre, then as now. Surprisingly there are no cows to be seen (Cambridge, Bristol, Chester and other cities have sheep and horses grazing around about them), but there are some chaps fishing near a weir at Bonhay. The wide streets and green spaces within the city and the rolling Devon countryside which form the hinterland suggest this would be a good place to live and work, it is presented as a civilised, spacious and clean environment. As such, my suspicion is that it only tells part of the story of life in urban Elizabethan England.

In tomorrow’s post: what are images of Moses and Job doing in the Protestant south west?

‘West Country to World’s End: the South West in the Tudor Age’ runs until 2 March 2014 at Exeter’s Royal Albert Memorial Museum. You can find all the details about the museum, it’s opening times, it’s wonderful café and more on their website.