This is a final post in a short series relating to Exeter’s martyrs memorial, the others are on the following:

In this final post I conclude with some thoughts on the ways that objects and places are invested with meaning, and the relationship between space, memory and history.

My final question about Exeter’s martyr memorial was: what is ‘Livery Dole’? The plaque on the monument stated that Thomas Benet had suffered at ‘Livery Dole’ but although I knew what an aircraft livery was, or could countenance a livery stable, otherwise I was drawing a blank. Exeter Memories came to my rescue again: Livery Dole is an ancient triangular site between what is now Heavitree Road and Magdalen Road. It was used as a place for executions – the last took place in 1818, when the unfortunate Samuel Holmyard was hanged for passing a forged City Bank one pound note. 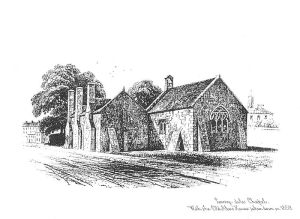 W. Spreat lithograph from 1850 showing the Dennis almshouses before they were replaced.

Liverydole now made sense – it meant that the Exeter memorial had therefore been erected near to the spot where Thomas Benet had been burnt to death. Hence my final post is about the meanings and significance that are attached to particular places and features of the landscape. All of the Protestant monuments that I have uncovered are erected as close as possible to the original site of the martyrdom, they are a deliberate attempt to attach particular memories to those sites, for later generations to read. Nearby, Heavitree’s almshouses represent a similar attempt to shape historical memory – they were erected in 1591 by Sir Robert Dennis, by tradition in penance for the part his ancestor had played in the execution of Thomas Benet in 1531. The ancestor in question was Sir Thomas Dennis, who had been the Sheriff of Exeter at the time and who had sentenced Benet to death. This act of charity proved that the current Sir Dennis was now firmly on the side of the true Church, unlike his unenlightened Catholic ancestor.

It seems like an obvious point, but it is worth reflecting on. Siting a memorial or a plaque near to the original location of the events that they commemorate helps to connect us to the past, to bring distant events closer to us. It allows us to begin to reconstruct those occasions, it gives us a stage on which we can imagine the events and people of the past as they were then. Of course, most early modern locations are completely unrecognisable now, but being near to where events once took place allows us to physically orientate ourselves towards them – the Cathedral, the remaining parts of the city walls and the central thoroughfares acting as our guides. It also impresses upon us a loose, but tenable connection to our predecessors – they also stood here, they also touched this, they also heard that. This can be an extraordinarily powerful feeling, so it is no wonder that all manner of people find it useful to try to channel that feeling to their own ends and purposes, whether those ends are defending the family name, asserting the validity of Protestantism, or preserving the Anglican status quo.

Detail from Hogenberg’s 1587 engraving of Exeter. Southernhay is near the city walls, Liverydole on the hills on the right.

This provides context for one final piece of information pointed to by Foxe’s Actes and Monuments. If Liverydole was the usual place of public execution in the city, why was Agnes Prest burnt at Southernhay? Historian Thomas Freeman discovered in the Freeman’s Book of Exeter that Sir Thomas Dennis, the aforementioned Sheriff of Exeter, had in fact wished to burn Benet in Southernhay, much closer to the city (see the central arrow on the map). However the mayor insisted that Benet be burned at Liverydole, a mile beyond the walls (to my delight, I realised that you can see the gallows at Liverydole in the distance on the hills to the right of the city in the engraving).  It seems likely that the Sheriff wanted to make a more public spectacle of Benet’s death, but that the mayor resisted it. We can only guess the reason for the mayor’s resistance – perhaps he was concerned that the burning might prove disorderly so he didn’t want it close to the city walls, or he may have been sympathetic to Benet and anxious to ensure his dignified death. Perhaps he was just a jobsworth who insisted everything be done according to custom.

By contrast when Agnes Prest was burnt in Mary’s reign it seems plausible that the regime was more intent on impressing upon the people of Exeter the dangers of heresy – the original impetus was deterrence after all. They staged their burnings in visible locations in order to make them propaganda events. It may also have been important that Agnes Prest was an outsider – she was not originally from Exeter – so perhaps the authorities were less anxious that the crowd might be sympathetic to this stranger’s plight. The crowd was present at judicial executions to affirm the validity of the state’s justice, to witness it, and to participate in the process of law – sympathy for the victim would  disrupt the performance of state power at the gallows. 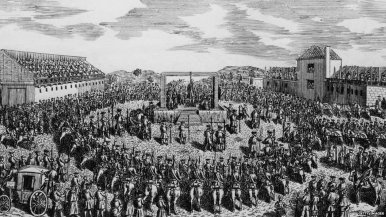 The gallows were meant to be a stage for state power as in this idealised depiction of Tyburn Tree. Participants didn’t always follow the script though.

Either way, the regime was attuned to the fact that places could be imbued with meaning, and they were keen to etch their authority on the towns and cities that they claimed authority over. This was just as true during the reign of Henry VIII: Liverydole was an intersection on the way into the city that many travellers would have passed through – it was therefore an excellent site to place a gruesome, noisome reminder of the reach of the state’s arm and the consequences of defying its authority. People who encountered the gallows on the way into town would be reminded physically of the strength of the Tudor regime even at such distance from the centre of power in London. And yet placing almshouses nearby also reminds us of the flip side of this patriarchal society – the meaning attached to the gallows by the state was penal justice, but the almshouses symbolised paternal charity. In a state with no standing army or police force, rulers and ruled were bound into a system of mutual benefit: English women and men did not simply obey the authorities to avoid brutal punishments, they expected that in return the authorities would take their religious, social and political responsibilities as rulers seriously. 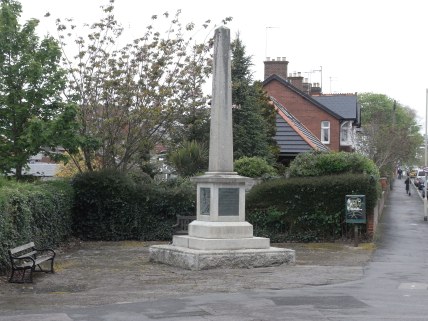 Hence we come finally to the dangerous power of history: the emotional and affective hold that it can have on us, which can be co-opted by those with a point to prove or with a case to make. Thomas Carlyle told us that ‘the Present is the living sum-total of the whole Past’, but we must beware when some people are telling us about the past in louder voices than others. That said, there could be another chapter in the martyr memorial. The Oxford movement is long gone, and despite the persistence of celebrations on November 5th, I think it is safe to say that anti-Catholicism is not as popular as it once was – contemporary Britain has new ethnic and religious groups to configure as the ‘other’. When it comes to the Exeter monument, presumably most people passing through on their way to and from the city centre don’t notice it enough to realise what it commemorates. If they do, it perhaps functions more as a reminder of the ‘brutal’ nature of the early modern world in general, rather than of the evil nature of the early modern Catholic Church in particular. Its close resemblance to war memorials is important – many of us think of those as monuments to the futile and senseless nature of warfare, so this gives a new context to the memorial. Now the martyr memorial can function in a similar fashion, as a symbol of the violence that humans have inflicted and continue to inflict on each other throughout history. The growth of the city further encourages this tendency – now the memorial is in the middle of a charming suburb, its location (at the site of the gallows) is no longer self-apparent but rather puzzling – how did the memorial end up on a street corner?

It is hard to not see the erasure and forgetting of the earlier memories attached to the statue as positive. Now they are gone we can attach new, and better meanings to these works of art, overwriting narratives about how the winners got here (national, progressive, exclusionary), with questions about why we all ended up here and what we might learn from that (inclusive, useful, complicated). ‘They being dead yet speak’, but what they say can be determined by who is listening, and who tells the tales for the next generation.

11 thoughts on “Memorial and history, Part 5: in which history delivers a warning from history, and I talk about ‘feelings’”