[In our mini-series ‘A Page in the Life’, each post briefly introduces a new writer and a single page from their manuscript. In this post, Dr Esther Sahle (@EstherSahle) of the University of Bremen offers us a glimpse of the diary of a young Quaker girl in eighteenth-century London, a manuscript which has been almost entirely neglected by historians.]

On October 19th, 1769, ‘at 6 o’clock in the morning’, and with ‘unspeakable regret’, seventeen-year old Betty Fothergill of Warrington climbed into a carriage bound for London.[1] Contrary to expectation, she ended up having a fantastic time. Spending the winter months visiting relatives in the capital, she recorded her adventures and reflections in a diary. This tells of countless social engagements with cousins and friends. Their main topic of conversation appears to have been their peers’ marriages and marriage prospects. With biting irony Betty dissected the motives – romantic, financial, incomprehensible – behind her friends’ matches. Her commentary on love and marriage at times is reminiscent of Jane Austen. 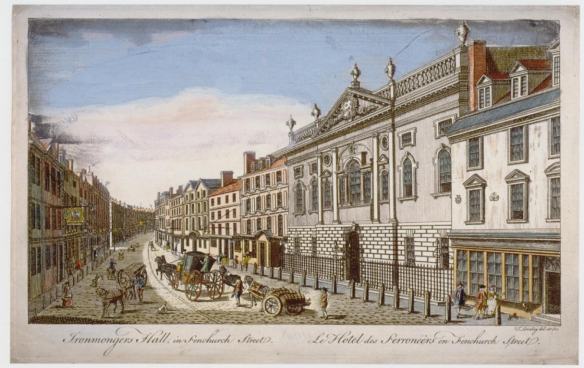 Yet, in spite of its literary merit, this unusual document has been all but ignored by scholarship. The only publication that draws on it, uses it merely as a source of information on her uncle – the better-known Dr John Fothergill.[2] On the page I have chosen for this post the eminent doctor also makes an appearance. Of interest here, however, is not him, but the young people’s reaction to a suggestion he makes. Betty wrote: ‘My Uncle […] drew us forth into a dispute upon the prerogative of husbands and wives. He insisted upon blind obedience of the latter to the former’. His audience was scandalized: ‘we as strenuously opposed him.’

Picture the scene: the uproar, the talking over each other, the indignation. ‘Well-beloved & respected’ Dr Fothergill, proposing something as objectionable as a wife’s submission to her husband. Then, of course, he admits he was only teasing: ‘After he had diverted us a little, he placed the affair upon a proper footing that there should be no obligation on one side more than another but a mutual endeavour to promote each other’s happiness.’

Married women’s liberty – or lack thereof – is a recurring theme in the diary, as can be seen in the other entries on that page of the diary:

A Cordial drop heaven on our cups as thrown? To make the nauceous draught of life go down.

4th Day.. my Aunt Communicated the intelligence of Cousin Freeman’s going into Yorkshire with a young Man to pay his address to Cos Elsy.. tho he was a person of fortune & Character there is some circumstances that to her Friends will make this union not very desirable_ I had never an opinion of love at first sight which it seems was the case here… as he had never once been in her company or heard her speak… A Capricious prepossession indeed & what I should not chuse much to depend one _ for is not the mind the chief object that constitutes happiness, is into that which gives a pleasing air to the features & manners, & does not it require time to discover these internal beauties… certainly or I have formed a very erroneous opinion of love………… we drank tea at Cos Freemans & went from thence to the young folks quarter meeting_ P.Pitts returnd home with us to stay. Then the next 6th Day… my uncle who delights in making young people chearfull which is the reason he is so generally beloved & respected by them… drew us forth into a dispute upon the prerogative of husbands & wives, he insisted upon blind obedience of the latter to the former, & we as strenously opposed him after he had diverted us a little he placed the affair upon a proper footing, that there should be no obligation on one side more than another, but a mutual endeavour to promote each other happiness. We all concurred in this sentiment, & so the affair was amicably adjusted.

8th Day… soon after breakfast, Prissy Pitts Sis Pristely & myself took a walk into the City… & called at several shops to purchase one odd thing or another… Prissy &… 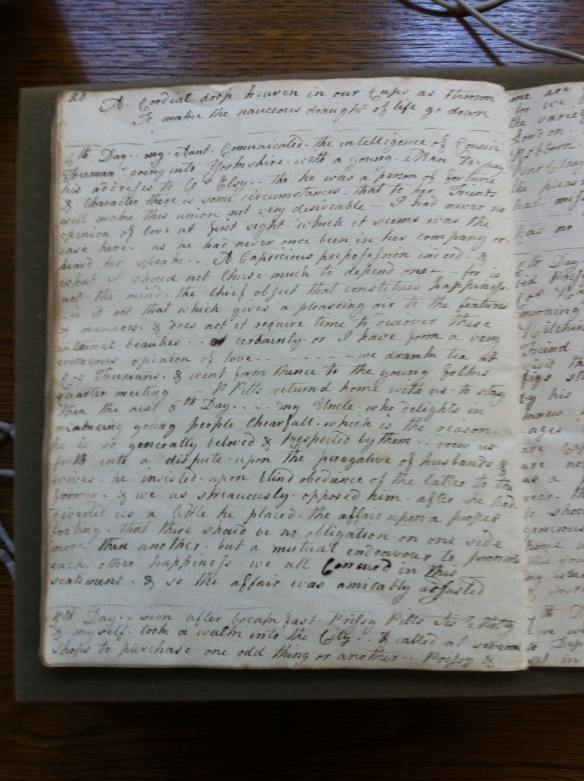 Under contemporary English law, women, upon marriage, lost the right to own property, enter into contracts, or even make wills. Legal and economic issues were decided by their husbands. As earlier historians put it: ‘Upon marriage, a woman died a kind of civil death.’[3] Betty was herself engaged to become married upon her return to Yorkshire. While she loved her fiancé – ‘that Person who is Dearest to me & in whom all my earthly happiness is centred’ – the loss of independence that would come with marriage looms large in her diary. [4] At a later date, she wrote: ‘…these men! How came I to be entangled with one of them – tho really and impartially my better judgement pleas for a single life […] so this I suppose is the case with other poor women who are cajoled by degrees to lose their liberty and then they have nothing to do but quietly submit.’[5]

During the eighteenth century, celibacy rates among English women dropped. While in the late sixteen-hundreds, almost a quarter of English women never married, a hundred years later only six per cent of them remained single.[6] Interestingly, Quaker women like Betty did the opposite.[7] They married ever less frequently. At the same time, Quaker communities grew increasingly wealthy.[8] Earlier researchers have insisted that if early modern women remained single, this had to be due to a lack of men (sic!). Betty’s concerns, however, suggest otherwise: the reasons may in fact have lain with the women themselves. Comfortably-off (Quaker) girls may have preferred staying on their own. Not wanting to risk their financial independence, they preferred the liberty of singledom to the ‘quiet submission’ marriage would have required.

[7] Richard T. Vann and David Eversley, Friends in Life and Death: The British and Irish Quakers in the Demographic Transition, 1650-1900, Cambridge: Cambridge University Press, 1992, p.104; Jeremy Boulton, ‘London Widowhood Revisited: The Decline of Female Remarriage in the Seventeenth and Early Eighteenth Centuries,’ Continuity and Change 5, no. 3 (1990).

9 thoughts on “A Page in the Life of Betty Fothergill: Marriage and Liberty in the Diary of Teenage Girl”