This post is part of our #AliceClark100 Online Reading Group. In it Laura Gowing offers some reflections on chapter five of The Working Life of Women in the Seventeenth Century, on ‘Crafts and Trades’. Laura is Professor of Early Modern History at King’s College London. You can access the book here.

When is a carpenter not a carpenter? When she is a seamstress. Guild or company records loomed large in Alice Clark’s survey of women in crafts and trades, yet their evidence was often confusing or ambivalent. This was particularly so in London, where the Custom of London from the early seventeenth century had enabled women and men with the Freedom of the City to engage in any city craft, not just the one of their own company. Hence, the girls apprenticed to Carpenters located by Clark’s research, who turn out to be apprenticed to seamstresses and silk-winders.

It is now evident that these female apprentices in the Carpenters’ were mirrored across the companies of late 17th century London, with artisans’ and merchants’ wives taking on apprentices in increasing numbers, almost always in sewing and keeping shops to sell the goods they made. Long before the mantua-makers of the late seventeenth century brought women up against tailors, women were sewing smocks, cuffs and bands for the London market, and girls were being apprenticed to learn from them.

Sewing dominated in the crafts and trades in which women worked, particularly in London. London’s particular customs thus brought skilled sewing work into guild management, not in terms of quality of work but as a means of incorporating training. By the late seventeenth century free single women and freemens’ wives and widows were taking apprentices in a range of seamstress and textile trades that reflected the specialised construction of garments, shoe and headwear: making children’s coats, periwigs, silk stockings, buttons, lace, gold and silver thread.

In other crafts, and outside London, Clark amassed a host of detail of the conflicts between guilds and the girls and women who found themselves on their margins. Carpenters’ wives being forbidden to unload timber, women bakers excluded from the trade for not having been apprenticed, pewterers ordered to buy no lead from women all reveal not only the arguments around inclusion, but the numbers of women working in trades which to modern eyes were ‘most unlikely’.

At the same time, guilds’ avowedly patriarchalist ideology perfectly answered Clark’s principal line of enquiry: it envisaged women as first and foremost members of working households, subsuming wives into husbands. While the balance of labour within those households is generally invisible, the role of widows in continuing to practice or supervise a guild craft after their husbands’ deaths proves easier to trace. Clark’s focus on Stationers – for the reason that, like the Carpenters, their records were accessible – illuminated early on the significant role that widows played in the burgeoning print industry, taking over workshops and running printing businesses through the seventeenth century.

Like other early twentieth-century feminists, Clark was interested in feme sole trader status, a feature of medieval borough custom that allowed married women in borough towns to be treated outisde the law of coverture. By this means a woman could ‘have her law… just as a single woman’. The advantages of this position not only granted some autonomy to wives, but protected husbands from their debts. Yet the actual single woman is largely absent from this story. To the modern women’s historian one of the most startling statements in this chapter comes on p.156, where we learn that  ‘except those who are classed as servants, all grown-up women were either married women or widows’.

Clark had neither the demographic evidence amassed in the 1970s and 1980s, which revealed around 20% of some 17th century generations remaining single, nor the more recent research of Amy Froide demonstrating the extent of seventeenth-century singlewomen’s productive labour and economic autonomy. This is a world with no independent single women, and that factor marks Clark’s view of trades and crafts significantly. Absent from the story are the spinsters, some of them free after apprenticeship, who ran their own businesses or worked as journeywomen, living as lodgers or together in group households; Clark’s patriarchal household crowds them out.

The frame of Clark’s picture, though it is often modified by the sheer range of her examples, is of course the demise of the old family economy and the idea that capitalistic organisation edged women out of the skilled and semi-skilled industries in which they had worked side by side with their husbands. Subsequent research has modified and contradicted this narrative; most recently the verb-oriented approach to tracing women’s productive work, and the tracking of women’s occupations by what they say about how they keep themselves in court, provide copious evidence on the extent of women’s independent work throughout the century. But it remains a question to focus the mind. 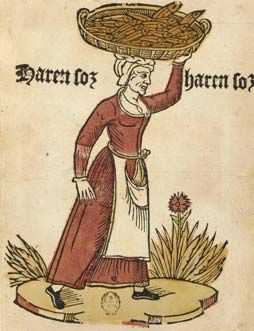 In retail and provisioning work, Clark’s other focus in this chapter, her picture is more reliable. Many of her findings here have been borne out more substantially by fuller evidence: women being edged out of  brewing, maintaining a place in selling fish and other foods, and the long-running role of retail in women’s working lives, with shops providing maintenance for widows as well as enterprises for married women. Recent analyses by Peter Earle, Alex Shepard and Amy Erickson have found around 7-12 % of women with occupational detail engaged in victualling and catering (more in London),  7-10% in hawking, 7% keeping shops.

They do not support Clark’s argument that independent industry and productive partnership both became harder to achieve by the late seventeenth century; in fact, in areas like shopkeeping and millinery there is increasing evidence that this was the moment that both married and single women had firmer opportunities to establish lasting or temporary occupations. Across Europe, the 17th and 18th-century city was a city of seamstresses. Missing from Clark’s story are the least visible, least recorded crafts and trades. Laundry and charring work occupied around 15% of women who gave details of what they did to the courts; selling second hand clothes was an important part of the retail market.

Looking at Clark again thirty years after I first encountered her, I’m most struck by her attention to where and how women appear in the archive. Her notes of indentures unusually made out to couples, to wives receving payments for food and ale, or paying rent, and the appearance of girls in lists of suspect categories of workers, reflects the interest of early twentieth-century feminists in bureaucracy as a means of exclusion. Her work lays the ground for an interrogation of guild records based not on what statutes say, but on the language of everyday transactions in apprenticeship registers and minutes, as the sisters and brothers of the medieval period are overtaken by the male freemen of the early modern.