What exactly did people believe in post-reformation England?  That deceptively simple question really goes to the heart of much of the ‘post-revisionist’ scholarship currently being generated by historians of the English reformation.  Whether the object of study is angels, the landscape, music or death, one underlying questions remains the same: what does this thing, this practice, this shred of belief tell us about the broader tapestry of post-reformation religious identity?  Tapestry is a reasonable metaphor – I’m going to refrain on this occasion from extending it too far, and talking about warps and wefts – but patchwork

is a better one, the term coined by Tessa Watt in her brilliant book Cheap Print and Popular Piety.[1]  Once or twice when teaching this I have actually taken to drawing an imaginary ‘patchwork’ on the whiteboard.  So what do we call the hypothetical individual, who believes he will be justified by faith but also thinks that if he doesn’t confess his sins he could be condemned to hell for them?  What about his wife, who sings metrical psalms and hates the pope but believes God to be physically present in the consecrated host?  And however we define such individuals, can we also reasonably group them together?  It is possible to recognise their difference, and at the same time claim they are one and the same?

So tapestry is OK, patchwork is better: palimpsest works pretty well too.  Tangentially, I wonder why so much of the metaphorical language we use to describe identity formation (there’s another one) is rooted in the everyday materiality of art and craft.  Our ability to label individual belief in the past seems inversely proportional to the amount we know about it.  I suppose that is a fairly natural state of affairs.  Complexity breeds complexity, and moulds certainty into uncertainty.  But the job of the historian is (I think) not just to (re-)present the past, but also in some sense to try to make sense of it.  So, for AG Dickens the majority of people in Elizabethan England were recognisable as Protestants; for Eamon Duffy they were perhaps traumatised Catholics; for Christopher Haigh, stiff-necked Parish Anglicans; for Judith Maltby, committed Prayer-Book Protestants; for Watt, their culture was ‘distinctively post-Reformation, but not thoroughly Protestant’; while for Robert Delumeau, the people of early modern Europe were probably not even thoroughly Christian.

I was reminded of the value of taking a step back from all of this the other day, while reading a treatise by William Perkins that I had never looked at in detail before.  Perkins,

probably most famous as the author of A Golden Chaine, and more famous still for the infamous diagram of salvation contained within it, was a prolific writer of theological and devotional tracts: the work in question is his The foundation of Christian religion gathered into sixe principles.[2]  The work begins with an address ‘to all ignorant people that desire to be instructed’, followed by a list of almost 30 erroneous ‘common opinions’ which Perkins goes on, throughout the text, to correct.  Reproducing this list in its entirety would be a little excessive, but let me pick and talk about a dozen or so points which seem to me to be particularly pertinent to the present discussion:

1 That faith is a mans good meaning & his good seruing of God.

3 That yee haue beleeued in Christ euer since you could remember.

11 That it is an easier thing to please God than to please our neighbour.

12 That yee can keepe the Commandements, as well as God will giue you leaue.

Taken together, these points seem to express a frustration at the laity’s lack of intellectual engagement with the concept of faith.  That is not to say that their faith was not complex, but it was certainly not structured in the reflective, self-conscious way demanded by men such as Perkins.  Ironically, it seems that Puritan divines would have preferred a little less fiducia and a little more credentia from the laity: a faith based less in instinct, trust and emotion, and rather more in knowledge and intellectual acceptance.  The most difficult (and therefore the most important) aspect of religion from the laity’s perspective was in striving to live according to the principles of Christian charity: God, in whom they had faith from their earliest years, was a comforting constant.  And yet many of the laity had a strong sense that it was ultimately possible to be good and to do good things, and that such behaviour was pleasing to God.  Elsewhere, Perkins also complained about those who felt that by reciting the Decalogue they were praying, and serving God.

7 That, if anie be strangely visited, hee is either taken with a Planet, or bewitched.

This I think is a useful reminder that popular belief was not straightforwardly Christian: it contained a mixture of folklorish, traditional, pagan and other elements.  In this sense it was a true patchwork.

13 That it is the safest, to doo in Religion as most doo.

14 That merry ballads & bookes, as Scoggin, Beuis of Southampton, &c. are good to driue away time, & to remoue hart quames.

20 That drinking and bezeling in the alehouse or tauerne is good fellowship, & shews a good kinde nature.

Popular religion in the broadest sense was above all a communal activity, not an individual or even a family or household one.  The reformation did not fundamentally change this, except perhaps amongst those who were the most literate in the new religious language.  Even then, perhaps all it did was change the nature of the society with which those individuals of advanced faith sought to surround themselves.  Good religion was to be expressed in good fellowship and good cheer, as much in the alehouse as in the church, as much with a lusty ballad as a reverent Psalm.  ‘Hart quames’ for most people were to be banished with a merry ballad, not meditated upon as a means to repentance and the enrichment of a saving faith.

9 That a Preacher is a good man no longer than he is in the pulpet. They thinke all like themselues.

18 That yee know al the Preacher can tell you: For he can say nothing, but that euery man is a sinner, that we must loue our neighbours as our selues, that euery man must bee saued by Christ: and all this ye can tell as well as he.

17 That a man which commeth at no Sermons, may as welbeleeue, as he which heares all the sermons in the world.

16 That a man neede not heare so many Sermons, except he could follow them better.

28 That a man need not haue any knowledg of religion, because he is not book learnd.

Finally, from the perspective of both the clergy and majority of the laity, a wide gulf existed between the two.  The reformation certainly contributed to a widespread anti-clericalism, that is to say, an opposition to the clerical pretensions of the new godly graduate clergy.  Complicated sermons were for educated people: the unlearned had nothing to gain thereby, because they already grasped the essentials of the faith: that all men were sinners, must be saved by Christ, and had an obligation to be charitable to their neighbours.  This was all well and good as far as it went, but of course for Perkins and others there were nuances, complexities, caveats and implications without which these broad truisms were worse than meaningless.  Such intellectual religion was unpopular in all senses: it was not for the great mass of people, who could profit more from each other’s good fellowship than a lengthy diatribe from the pulpit. 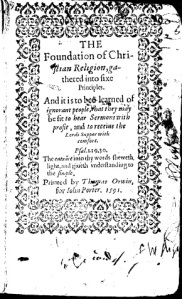 The thing I’d like to draw from all this is that occasionally it is possible to lose sight of the wood for the trees.  While it can be extremely interesting to interrogate popular belief in minute theological and intellectual detail, it is not always the most productive path to follow (there are of course many, many exceptions).  For, by doing so, we can end up unwittingly forcing a resolutely anti-intellectual form of belief into a (for want of a better word) Perkinsian framework, and thereby doing it some violence, and just a little injustice.  We must remember that popular belief was both simple and complex, both patchwork and quilt.  It may be made up of innumerable diverse fragments, but it also had simple key priorities and a clearly defined basic form.  Each quilt may be unique, but quilts are also recognisably the same: a quilt is a quilt, and not a cushion cover, or a wall-hanging.  Identity is full of contradictions, but not all contradictions have to be resolved.  We each of us probably live with a series of competing and contradictory impulses and beliefs held in a kind of creative tension with one another, and the people of early modern England were probably no different.

3 thoughts on “‘For yee lead your liues in great ignorance’: Puritan Ponderings on the Patchwork of Popular Belief”