[This is the second piece in ‘The Future of History from Below’ online symposium (#historyfrombelow). Ruth Mather is a doctoral candidate at Queen Mary, University of London, studying the links between working-class political identities and the home in the late eighteenth and early nineteenth centuries. She also blogs about her adventures in research.]

I became interested in ‘history from below’ as an undergraduate through the encouragement of Professor Robert Poole, who introduced me to E.P. Thompson’s The Making of the English Working Class. Thompson’s book, which reaches its half-century this year, showed me a new way of doing history, one which didn’t patronise working people, or subsume them in a narrative of progress, but instead constructed a story about thinking, feeling people with their own ideas about their lives and their own strategies for living them. It’s important that our histories show the humanity of our subjects  – in my case the English labouring classes in the late-eighteenth and early-nineteenth century. This is not about glorifying poverty or writing hero narratives, but simply attempting to understand the messy, complicated details of the real lives of ordinary people.

I’m not alone in thinking this is particularly crucial at the moment, when a new history curriculum threatens to take us back to stories of great men and Whiggish progress and welfare recipients are demonised for political gain. However, other participants in this symposium will be discussing the continued relevance of ‘history from (and for) below’ in much more detail over the coming weeks, and it is not difficult to find excellent explanations of why ‘history matters’ more generally. So, having outlined why ‘history from below’ is important to me, I’d like to focus on the question of how we can find sources that can help to uncover the domestic lives of ordinary people as part of this wider project of uncovering voices that have been underprivileged in the historical record.

These weavers’ cottages in Mount Pleasant, Preston, were demolished in the 1960s. Note the windowed cellars, to allow light for working in the humid basement conditions. (Preston Digital Archive)

My current research explores the role of ‘home’ as an idea and as a physical space in radical political culture in England during the late Georgian period (c.1780-1830). In this period, the pressures of war, industrialisation and population growth, shared experiences of work and community, and the spread of democratic ideals led to the increasing involvement in working-class men and women in organised political action. This political participation has been much studied, but usually only in the context of its public expression, while the homes and families of working people have been studied in isolation from any growing political consciousness. My work addresses this dichotomy between public and private worlds, showing that ideas and practices involving home and family were intertwined with politics in the late-eighteenth and early-nineteenth centuries.  In doing so, I hope to uncover contributions to radical politics that have previously been neglected, and particularly the contributions of women in their capacities as domestic managers.

However, as I started work on this project, I realised that while we’re now fairly familiar with popular politics and the sources for studying them, we know more very little about English plebeian homes from this period. While Georgian middling- and upper-class homes have benefitted from detailed histories of the social meaning invested in their architecture and furnishings, all but a few historians have neglected the living spaces of plebeian men and women, perhaps assuming from gloomy accounts of slums that little meaning could be found among the misery. The realities of working-class housing are drowned out by disapproving, concerned, moralising voices from above, imposing their own domestic ideals. Furthermore, as Raphael Samuel put it, ‘the built environment [like the historical record] is apt to give a privileged place to the powerful’,1 and it is only fairly recently that heritage organisations have begun to take an interest in preserving the dwellings of working people.2 Many, like the weavers’ cottages pictured above, have been demolished. Buildings that do survive without such intervention tend to have undergone considerable alteration to make them habitable, while those maintained as examples of period architecture do not reflect the variety of spaces (including much older buildings) that people may have lived in.

But the picture is not altogether negative for the historian, and as with so many other ‘histories from below’, the history of labouring-class housing can be pieced together from the fragments we do have. The surviving buildings might not be fully representative, but this does not mean they are not useful. Alongside archaeological investigations and images of workers’ housing, they can tell us a great deal about the size of houses, the availability of natural light, and sometimes the separation (or otherwise) of domestic and work functions. Such knowledge can be further supplemented by the use of probate and pauper inventories and records of witness testimonies in court cases. The former were used to assess the wealth of an individual, either where there was debate about the dispersal of their property after death or where a portion could be claimed back by the parish after death from an individual applying for poor relief. They list items in a house, often by room, and with some description and a monetary value, thus providing a snapshot of an individual’s household goods at a given moment in time. 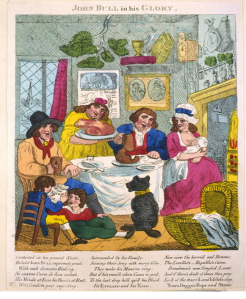 T. Ovenden, John Bull in his Glory, Hand-coloured engraving, dimensions and publisher not known but probably London, 1793, now in the Library of Congress collection.

While inventories provide vital information about the kinds of domestic items available to working people, they are productively supplemented by witness testimony, which can provide a less static impression of the movement of goods and the relationships their owners had with the objects and spaces in their homes, as well as with other inhabitants. These kinds of details also emerge from ego-documents – the autobiographies, diaries and letters of plebeian men (and far fewer women) in which they describe their own lives. If court records tend to demonstrate norms only where these have been transgressed, ego-documents tend to emphasise the respectability of the author, who in any case is unusual in his ability and desire to record his experiences. However, such sources provide a useful counter to middle-class social commentary, and can be read alongside ballads and broadsides, or scurrilous caricature, which (while caution must be exercised with regard to their origins and intentions) can provide a livelier image of the working-class home. What, for example, can objects such as Ovenden’s engraving (above) or a Napoleon figurine (below) tell us about the politics of working-class home-making?3 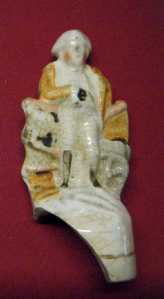 What I hope that this brief introduction has emphasised is that even supposedly private aspects of hidden lives can be illuminated by piecing together the fragments of evidence about ordinary lives. There is an excellent essay by Carolyn Steedman in her collection Dust, in which she talks about the symbolism of a rag rug in the working-class home – in this case one that doesn’t exist in the interior depicted in Elizabeth Gaskell’s  Mary Barton (1848). The imagined rag rug, Steedman concludes, is part of the way we use these plebeian interiors to tell our own stories.4 What I hope, through the piecing together of scraps like rags in a rug, is to tell a story that, even if it is my own, is at least an empathetic and multi-faceted one, representative of a variety of experiences and most importantly, of the humanity of my subjects. I hope that histories from below can continue to keep pushing into new areas of research and uncovering new sources and ways of using them, so that our understanding of the diversity of past lives, our empathy for current ones, and our ability to engage our audience with both, is continually enhanced.

3 For more on the Napoleon figurine, see P.R. Mullins & N. Jeffries, ‘The Banality of Gilding: Innocuous Materiality and Transatlantic Consumption in the Gilded Age’ in International Journal of Historical Archaeology, Vol. 16, Issue 4 (2012), pp.745-760.

16 thoughts on “Ruth Mather, ‘The Home-Making of the English Working Class’”