This is the fourth post in a series of posts relating to Exeter’s martyrs memorial, the others are on the following:

Today’s question is – what do we know about the creation and placing of Exeter’s martyr monument? The endlessly informative Exeter memories website furnished me with more details about the city’s own specimen. Funded by public conscription, it was designed by Exeter’s Harry Hems (above), a London born master sculptor and wood carver, who made Exeter his home. Hems was apparently quite a character, getting into numerous fights with his workers, being hauled before income-tax officials, but also laying on a feast for the poor and aged of St Sidwells every Christmas. Hems came to the City to work on the Royal and Albert Memorial Museum in 1866 – the exterior stonework (above) of the museum contains many examples of his work – and he stayed, setting up 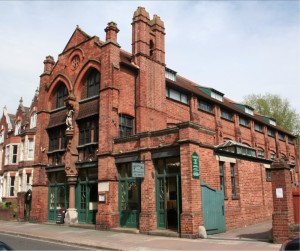 a very successful business that produced carvings for 400 churches and 100 public buildings in the area. If you want to know more, you could visit Hems’ former home and workshop on Longbrook Street – downstairs it is now ‘Harry’s Restaurant’ (right) – or try the excellent RAMM Harry Hems city tour that takes in some examples of Hems’ work, including the martyrs’ memorial.

A misericord of a woman picking nits [?] from the RAMM Hems Collection

Indeed, the relationship between Harry Hems and the Museum is an important one, and remains so to this day. Whilst working on local medieval churches, Hems salvaged many pieces of medieval woodwork that he displayed in his workshop as an inspiration for his craftsmen – in a similar way, Sir John Soanes’ museum, the subject of my recent pair of posts on heritage, was also originally intended as a store of examples for his architectural students. After Hems’ death the RAMM was able to purchase over 480 items from Hems’ collection, including numerous roof bosses, roof angels, bench ends, fragments of church screens and font covers, and much more, making it one of the largest and most important collections of medieval woodwork held in a British museum. There’s lots more on Hems and his work on the RAMM website, including some great videos of his work.

So now we have a master craftsman, who helped to create one of Exeter’s most impressive historic buildings, who was working on medieval Churches, whose historical artefacts became the basis for a nationally important collection, who designed a monument to two sixteenth-century martyrs. Phew. To entangle things further, I am going to speculate that Hems met the creator of the Oxford Martyrs’ Monument (discussed in my previous post), George Gilbert Scott, when Scott was creating the ‘Martyrs’ Pulpit’ in Exeter Cathedral in the 1870s (query – does anyone know if it would have been carved in situ?) – Hems also produced carvings for the Cathedral including a grammatically incorrect memorial to R D Blackmore, the author of Lorna Doone. The carvings on Scott’s Exeter pulpit depict various Christian martyrs including St Boniface, who was born near the city, and Bishop John Coleridge Pattison, ordained at Exeter Cathedral and then killed by indigenous folk in the Solomon Islands in 1871. It seems entirely plausible that Hems found inspiration for his own relatively modest monument from Scott’s more spectacular example, just as Thomas Benet had imitated the actions of Martin Luther in nailing his reformed protest to the cathedral door. Poetic, but fanciful, I hear you cry…

Nevertheless, the time that the monument was created, the fact that the money to pay for it was raised by public subscription (as with the Protestant Alliance monuments), and the (plausible, if speculative) connection with Scott, all suggest that Exeter’s monument is part of a national, anti-Catholic impulse linked to the religio-political developments I discussed yesterday.

Tomorrow is the final post in the series, when I will attempt to sum up with my thoughts on the ways that objects and places are invested with meaning, and the relationship between space, memory and history.

9 thoughts on “Memorial and history, Part 4: in which several fights break out and a man is murdered in the Solomon Islands”