The international conference is a well-loved feature of academic life.

Its scholarly value should not be underestimated: it brings together researchers who might otherwise never have a chance to talk in person and can help to break down the boundaries between different national research cultures. It is too easy, especially as a Britain-based scholar of British history, to miss out on all of the excellent and often complementary work going on in other languages and in other places. Spending a few days in a foreign city discussing research with European or North American colleagues often provides a fresh perspective that can be very difficult to get at home, even in a cosmopolitan city like London.

However, international conferences aren’t just vital for ‘knowledge exchange’ and ‘developing strategic partnerships’, they’re also a nice perk of the job. Indeed, I’d go so far as to say they’re a customary perquisite that many academics would defend all the way to the Tyburn tree. They are usually at least partly subsidised and, if nothing else, provide a good excuse to fly off to somewhere you might otherwise never get around to visiting. 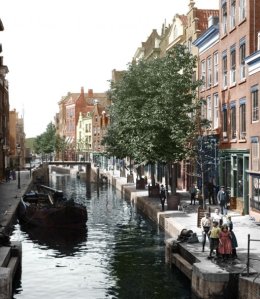 A Rotterdam canal in 1904. Note the narrowboat on the left, just chillin’

My first opportunity came whilst I was still a PhD student at Warwick in 2008 when the Social History Society decided to host their annual conference at Erasmus University Rotterdam. As this was one of the first times I’d presented a paper, I was inevitably nervous. Thankfully, some unusually sensible Dutch laws made relaxation easy … I remember with great fondness unwinding at the end of the day next to a picturesque old canal with a well-deserved local delicacy, watching the narrowboats slide calmly past.

Sometimes, however, I find that the ‘scholarly’ and the ‘recreational’ parts of international conference-going can get all mixed up together. For instance, a few years after Rotterdam I travelled to Colorado for the annual North American Conference on British Studies with my co-blogger Mark. We spent almost the entire nine-hour flight jabbing away about history, especially our shared interest in early modern ‘popular culture’, and we didn’t stop the next day as we wandered around the city. That evening, we headed off to do a classic touristy event: a Broncos football game. It was a marvelous experience which I don’t regret for a moment, but I suspect we were the only two in the audience of 76,000 who were paying as much attention to the peculiar vernacular customs of American football culture as to Tim Tebow’s quarterbacking. 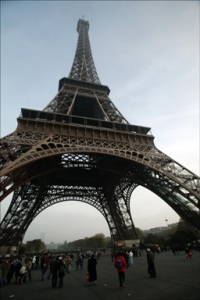 Most recently, on a conference trip to Paris a few weeks ago, I found myself standing under the Eiffel Tower after a couple days of intense scholarly discussion. A lovely view, but I was a bit distracted. Rather than admiring this splendid feat of engineering, I was absent-mindedly chatting with colleagues about the social impact of venereal diseases in early modern London.

Am I alone in this? Or is this just the enviable curse of a globe-trotting historian?

2 thoughts on “When history and holidaying collide”