This is the third of three posts surveying the London Catholic community at the time of the Gunpowder Plot. View the first here and the second here.

Yesterday we discovered that records of fluctuating levels of persecution might in fact provide us with more information about shifting international relations and official anxieties than changing levels of commitment to Catholicism. In this final post I use more qualitative data in an attempt to flesh out our understanding of the Catholic community in London through an exploration of some of the most prominent sites of Catholic activity in the capital.

Perhaps surprisingly, priestly activity is particularly visible in the records relating to the numerous London gaols. Most seminarists were incarcerated at some point during the time they spent in England, but in practice this could facilitate rather than confine religious activism, as the farcical laxity of restrictions in these privately run institutions facilitated a variety of Catholic practices. The London Sessions Records document that in May 1612 there were seven suspected priests housed in Newgate, whilst the records of the Society of Jesus indicate that in 1615 there were six priests in Newgate and twelve languishing in the Clink. Even the diligent Spanish ambassador Count Gondomar was aware the reputation of the gaols, noting in a letter to Philip III that ‘priests in detention celebrate mass and give communion to many with such little secrecy, that it is impossible that the king and his councillors do not know it’. Peter Lake and Michael Questier have argued that prisons acted as clerical lodging houses, arenas for a variety of Catholic pastoral and propaganda activities, becoming in effect ‘centralised locales where many priests were gathered together, to which other Catholics could resort’. They also provided the first point of contact for many of the priests entering the country: on arrival in London Thomas Maxfield’s first action was to seek out his friend Father Harris at the Gatehouse, where he celebrated his first mass in England. 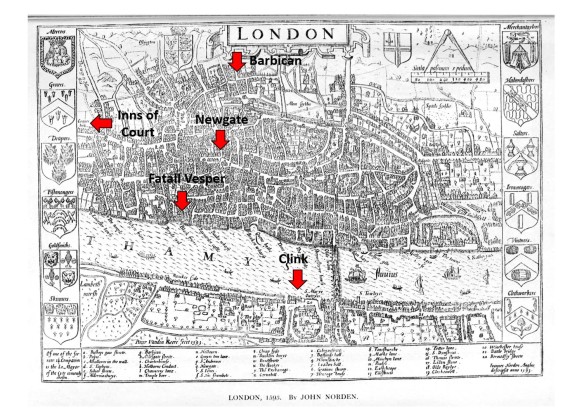 The uneasiness on the behalf of the government with regard to prevailing conditions in the prisons is further evidence of their status as resource for the Catholic community. Periodically there were complaints in Parliament that lax regulation allowed such gaols to become ‘churches of the Papists’, and in 1612 charges were bought against Simon Houghton, the keeper of Newgate for making the prison a ‘chapel for superstitious service’ and allowing priests to leave the prison to ‘work what mischief they could’ in the city before returning again at night. The extent to which priests were able to operate within such confines should not be underestimated – a search of the Clink in April 1626 uncovered altars in four of the priest’s chambers, along with ‘cart loads’ of books and ‘many rich copes, surplices, wax candles, crosses, crucifixes very rich, beads, jewels, chains, and chalices of silver and of gold’.

The situation in the prisons bears much resemblance to that of the embassy chapels, which also generated much official anxiety. Throughout James I’s reign Londoners could secretly attend mass at the residences of various Catholic diplomats in the city, and sizable crowds appear to have attended such services. Attempts were made to prevent such use of these embassy chapels in 1606, 1610 and 1611, but it proved a ticklish problem as James was loathe to offend the diplomatic immunity of the ambassadors. Of particular concern was the Spanish embassy just outside the city walls at the Barbican, which gained a reputation as the principle centre of Catholic worship in the city – on Sundays two masses were celebrated there, one for the staff, the other for the public, and the latter were liable to attract conspicuous crowds. Indeed, the Spanish ambassador Gondomar described the embassy as ‘the parish and cathedral church for London’. During Holy Week in 1611 so many people flocked to the chapel that James asked Gondomar to show more restraint because the public celebration of mass was causing ‘grave scandal at court’. It seems that this had little effect however, and in 1613 proceedings were initiated against a number of people attending mass at the embassy on Palm Sunday. Hence embassies and prisons could evidently function as centres of devotion, providing the Catholic community in London with the opportunity to participate in worship and to access guidance and support.

III. The Inns of Court

The unique environment in the capital had other characteristics that encouraged the continued existence of Catholicism. At the Inns of Court the staunchly conservative lawyers showed little enthusiasm for reform, and the government repeatedly tried to rid the legal professions of papists. Lying to the west of the city, the constant traffic of lawyers, justices, clients and students could cloak a priest’s movements, and the Inns’ gardens and walks provided what appears to have been a recognised rendezvous, ideally suited for clandestine conference and discussion. Despite formal tests of orthodoxy and regular chamber searches, papists still gained admission to the houses, and the Inns continued to be frequented by Catholics.

The capital also provided printers and publishers the materials and privacy they needed to ply their trade. John Gee, alongside his list of Roman priests residing in the capital, also supplied a list of over one-hundred Catholic works that he claimed were printed and distributed there. The reports of William Udall, a government informer, also testified to a burgeoning underground literature. Udall was involved in exposing the circulation of proscribed books in the capital, and his reports detailed both distributors and receivers. Examples underwrite the joined up nature of the Catholic underground: Ann Dowse was a widow who ‘selleth Popish books’ and who appeared in the recusant rolls on four separate years, she dwelt against the turning stile into Lincoln’s Inn Fields, placing her within walking distance of hearing mass at the Inns of Court. Meanwhile, one of the biggest seizures that Udall was involved in was at the Venetian embassy, when a substantial store of books were found in the cellars. Udall was also thwarted in his attempts to secure a prisoner following a successful search of Montague House in Southwark, because the Keeper at the Clink ‘suffreth priests to escape for money’.

Even higher up the social scale in the refined atmosphere of the king’s court, there was also a distinctive Catholic presence. James only required a minimum of conformity from his Councillors and Ministers, and his Queen, Anne of Denmark, had converted to Catholicism. What’s more historians have traced numerous contemporary courtiers and office holders with known Catholic connections, and the Catholic tinge that characterised James’ court is reasonably well known.

Summary: The London Catholic Community and the Gunpowder Plot 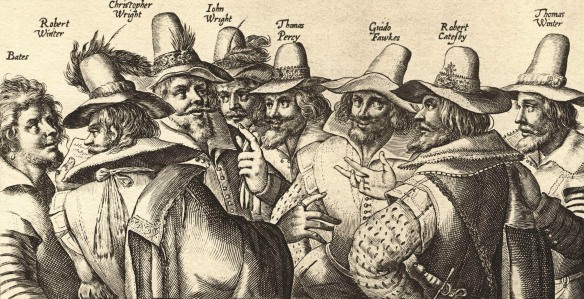 I don’t think that it would be going too far to say that the Catholic presence in London formed an authentic community – people evidently knew where to go to hear mass, contact a priest or to secure books and devotional objects. Nothing illustrates the integrated nature of the community better than the course of events known to history as the Gunpowder Plot. The international aspect of the religion is underlined by the plotters’ links with Continental Catholicism: Guy Fawkes and Tom Wintour had both fought for Catholic Spain in the Low Countries, and both visited the Spanish court in the hope of securing support for the English cause. The plotters links to the Jesuits were extensive: Tom Wintour was introduced to Henry Garnet whilst in Spain, and in England he and other plotters visited the Superior in his rented London houses. Conspirator Thomas Percy was one guest present at White Webbs in 1604 in a group that also included Sir Thomas Parry, English ambassador in Paris, and William Byrd, a papist court musician who on this occasion sang high mass. Many of the plotters had ties to court: Percy himself was in the service of his courtier cousin the ninth earl of Northumberland. Other links across the community can be discovered – Thomas Wintour’s sister-in-law, Gertrude, was listed as a recusant in Holborn, and several members of the Inner Temple were deeply implicated in the plot, indeed, when there were fears on November 1st that the plot had been betrayed, Robert Catesby met and talked with fellow conspirator Francis Tresham in Lincoln’s Inn Walks. Confinement of suspects after the failure of the plot did not sever links with the Catholic community either: Garnet was able to maintain contact with his fellow priests despite his imprisonment, and Elizabeth Vaux, also deeply implicated in events, was surprised in her cell whilst having ‘just completed the Holy Sacrifice’ with a Father in Newgate gaol.

Although the crown presented it to the world as a Jesuit conspiracy, it is evident that the Plot was embedded in an extensive Catholic network that formed a coherent community within the city. This is of course not to suggest that the majority of the members of this community would support the actions of the Gunpowder plotters – the reality was that the conspirators struggled for support and their actions would have appalled most contemporaries, whatever their religious allegiance. What is clear is that this urban community included members from across a wide social spectrum. The capital served as the centre of communications for the wider English Catholic community, priests touched base in the city and it provided a link to the continent and the wider international arena. Its importance as a rallying point and a focus for Catholics struggling to practice their faith in a hostile and restricted environment should not be underestimated.

5 thoughts on “Gunpowder, Treason and Plot III: Places and Practice”