This is the first in a series of posts written to mark the publication of my book, Alehouses and Good Fellowship in Early Modern England, which is now available in paperback. Monster readers can take advantage of a special offer to get 25% off (getting the book for just £13.49) by using the promotion code ‘BB125’ when ordering here. Each post in this series focuses on a character that features in the book, and uses them to highlight some of my key themes and arguments. 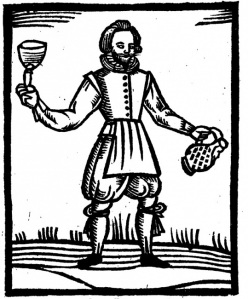 Roaring Dick is the narrator of an eponymous 1630s drinking ballad of the sort that would have been performed in, and perhaps even pasted onto the walls of, England’s seventeenth-century alehouses. His message is an inviting one: join him in a toast…

“Here’s a health to all good fellows,

that intend with me to join,

At the Tavern, or the Ale-house,

and will freely spend their coin.

But for such as hate strong liquor,

are not for my company,

O it makes my wits the quicker,

when I taste it thoroughly.”

Roaring Dick’s panegyric to a few pots of strong stuff down at the alehouse was typical of a whole genre of contemporary drinking songs – known as ‘good fellowship’ ballads – and it provides us with valuable insight into the reasons why so many people chose to spend their time and money in England’s growing number of alehouses (there were roughly 25,000 of them in the 1570s, but their number had rocketed to 50,000 by the 1630s.) 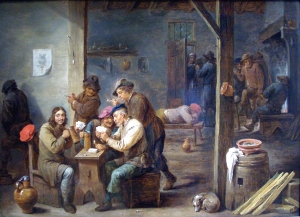 The alehouse was on the rise

Historians have long been aware that alehouses were becoming more prevalent in seventeenth-century England than they had ever been before, but explanations as to why tended to see this as a function of growing poverty. England was witnessing a period of high food prices and low real wages, and the popularity of the alehouse was therefore attributed to growing numbers of poor men stepping through their doors in pursuit of narcotic oblivion, seeking out alcohol as an anesthetic that could render them senseless and thus ‘blot out the horror of their lives’.[1]

But Roaring Dick paints a rather different picture of alehouse culture: for him a visit to the alehouse was not about achieving a state of drunken oblivion. Rather, it was about enjoying spending time in good company: in ‘good fellowship’. He has little time for those who want to sit around glumly drowning their sorrows:

“Wherefore should we live in sorrow,

since we may embrace true joy?

as most commonly they’ll say.”

He wants to seize and enjoy the moment, encouraging his companions to ‘Come my Lads, be blythe and merry’ and to ‘sing and drinke’ long into the night. For Roaring Dick, and for many other ballad good fellows, the alehouse is a world of liberality, pleasure, and of living-in—rather than escaping from—the present.

It’s one of the key arguments of the book, then, that contemporaries flocked to the alehouse above all to engage in this spirit of jovial good fellowship. It was a hub of camaraderie, sociability and friendship, and it was for this reason that men and women, young and old, poor labourers and prosperous yeomen farmers, headed down the pub.

Of course, alcohol was part of the attraction. Roaring Dick was not alone in insisting that you had to ‘taste it thoroughly’ to get the best out of a visit to the alehouse. But its attraction was not as a narcotic or anesthetic – a type of drug that dulls the senses – but rather as a stimulant, something that would, as Dick puts it, ‘makes my wits the quicker’. A generous helping of ale, beer or wine was recommended as it served as such an effective adjunct to the desired environment of mirth, jollity and song. It was seen as a pick-me-up.[2]

Contemporaries called this state of sociable intoxication being ‘merry’, and that’s what they were aiming for when they drank. They were well aware, however, that it was all too easy to overshoot this optimal level of drunkenness and end up being ‘overcome’ by drink, a state where all control of mind and body was lost: a state of alcoholic stupor. Overstepping the mark was not uncommon, but ending the night in a state of drunken oblivion was not what alehouse-goers were in it for. In fact, those who did cross the line were likely to be subjected to the further humiliation of elaborate shaming rituals, as we will see in the next post… 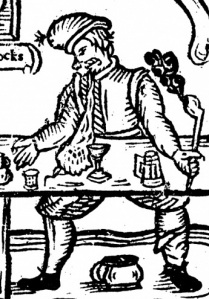