One of our ongoing conversations on this blog has revolved around the most appropriate terms that practitioners of history ‘from below’ can use to describe their subjects: are we studying ‘the working class’? The ‘lower classes’? The ‘middling and poorer sort of people’? The ‘plebs’? This post doesn’t provide any answers I’m afraid, but in it I want to resume the conversation by highlighting and briefly interrogating a term that seems to me to have been enjoying a certain vogue recently: ‘the people’. 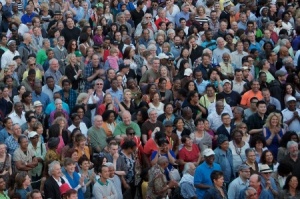 I haven’t yet had the time to subject this trend to any serious ‘culturomics’ (I’m sure it would be interesting to chart changes over time in the prominence of ‘the people’ and close variants in the titles of history books, which could be done using the Bibliography of British and Irish History). So I will have to rely on some old-fashioned impressionistic evidence: a bunch of books on history ‘from below’ that I have recently bought. The term is by no means a new one of course, but it – and some close relatives – do seem to have cropped up a lot lately:

What might account for this recent popularity? Well, it isn’t always easy to tell. A lot of the authors listed above don’t really explain the choice of the term: for Andy Wood it is used principally as useful shorthand for his preferred ‘poor and middling sort of people’, a phrase borrowed from early modern contemporaries. Rollison and Hopkin tend to deploy it for its practical pithiness, as a convenient collective noun for peasants, fishermen, textile workers and the like. The choice often seems relatively under-theorised, but perhaps that is in itself part of the explanation: choosing ‘the people’ for a title doesn’t require the author to make a lengthy justification in the way that choosing ‘class’, and all the theoretical baggage that comes with it, does.

It has other advantages too: for instance it does not carry the same negative connotations that ‘lower class ‘ or ‘plebeian’ can. It is a term that was often used by the societies under study (an ’emic’ term), and yet simultaneously one that can be widely understood by modern readers (unlike ‘sorts’), and it’s lack of theoretical trappings makes it accessible and recognisable to readers beyond the academy. Indeed, it makes an obvious choice for popular history books such as Alison Light’s, and the likely focus of any book titled ‘a people’s history of’ will be clear enough to all. There is something suitably ordinary and demotic about the term which neatly resonates with the subject matter. Moreover, it’s a term that in England at least has a history stretching back to the Middle Ages, and therefore unlike signifiers using ‘class’ it can provide a common vocabulary for scholars working across a wide range of chronological periods. It is worth noting that my list above includes works covering every century from 1066 to the present. It would be interesting to run a project on the history and meanings of the term ‘the people’ across the centuries, as has been done for instance for ‘commonwealth‘.

So, those are just a few of the reasons that might attract historians to use the term. But here comes the bit where I try and load it up with some of that pesky ‘baggage’ that so many of our other terms have. It should be pointed out that whilst a lot of authors opt to use ‘the people’ in their titles, that’s not to say they are embracing it as a useful category of historical analysis: many don’t use it as an organising concept within the covers of their books. Those that do tend to use it in a way that transforms the category of ‘the people’ from the handy neutral signifier outlined above into a much more charged term.

The works by Rollison, Jacob and Secretan, and Todd, could all to some extent be said to be interested in the processes whereby those outside of traditional upper classes come to lay claim to greater political influence in their society, and move from being a subject of fear and denigration to being valorised and valued: when the working and/or middle classes gain recognition as ‘The People’, whose interests are construed as synonymous with the interests of society as a whole. Although Rollison argues that the term ‘the commonalty’ was more likely to be used in medieval England than ‘The People’ to reflect this, the Levellers of the seventeenth century certainly used the latter, and it was likewise prevalent in the political discourse that Todd shows accompanied the ‘rise of the working class’ in Britain after 1945.

Using the term ‘the people’ can imply, then, a certain politics, or at least a certain argument: it signposts an emphasis on the agency and worth of ordinary people; that the story will be one of, or about, valorisation. In the works of many social historians this will undoubtedly be the case, but for those who want to tell a different story ‘the people’ may therefore be a compromised category. Indeed, in her recent attempt to challenge our perceptions of family history, Alison Light choose deliberately to title her book Common People, and not The Common People, because she ‘did not want to heroize the working people’ she wrote about (nor, for that matter, to homogenise them as a collective noun, another possible problem with the term). Interestingly, she also opted for the term ‘common’ precisely because of the ‘derogatory overtones associated with the word’, because the effects of being sneered at for being lower class are central to ‘generating who we are’: they ‘go deep’.[1] If we reject disparaging labels for our subjects, in favour of the more affirming label of ‘the people’, we are missing the fact that for most of our subjects pejoratives rather than praise have more often been the currency of their historical experience.

Moreover, if ‘the people’ has often been used both historically and by historians to designate a group with political influence and some degree of cultural kudos, it should come as no surprise that the category has regularly been deployed in both cases with certain restrictions attached. The Levellers, for instance, claimed to speak as representatives of ‘the people’, and they commonly framed themselves as a broad alliance of ‘the poorer and middle sort of people’. But the fact that they still made a distinction between the two groups here was a crucial one: when it came to the Putney debates there were many of them who saw women, children, apprentices, servants and wage-labourers as beyond the pale of ‘the freeborn English people’, and argued that they should be excluded from the franchise.[2] There were also limits to what Jacob and Secretan argue was an upsurge in the praise of ordinary people within early modern Britain and the Dutch Republic: the argument only applies when following their limited definition of ordinary people as ‘literate and in possession of skills useful to the state and commercial life’.[3] The illiterate – perhaps as much as 70% of the adult male and 90% of adult female populations – do not count as ‘the people’ here.

The more general issue here, then, is that many of the individuals and groups that history ‘from below’ is interested in might be obscured by focusing on a category that – whilst it often includes a large swathe of non-elites – nonetheless leaves many more excluded. The question of who constituted ‘the people’ in any given historical context is an interesting one: and it needs to be interrogated in each case. That does mean, however, that using ‘the people’ as a neutral, unencumbered, shorthand term, one that allows us to sidestep the usual issues surrounding the terminology of history ‘from below’ (itself, of course, a heavily laden phrase) does not seem to me to be a viable option. It is not my intention to call for the fall of ‘the people’ as a useful category of analysis for historians. Rather more tediously, I’m afraid, I think my case here is that – like many of it’s alternatives – it’s use may, after all, require careful and explicit justification.