In 1787, a rag-tag band of rebels and revolutionaries gathered in Philadelphia to write a constitution. They decided to begin the document with a phrase that has since become rather famous: ‘We the People of the United States’.

About 250 years earlier, in the 1530s and 40s, there were a series of new translations of the Bible into English that included an intriguing phrase amongst the Psalms: ‘Let us knele before the LORDE oure maker. For he is oure God: as for us, we are the people of his pasture, and the shepe of his handes.’ The phrase was integrated into the new Book of Common Prayer in 1549, so from then on English congregations would routinely sing this together, collectively declaring themselves to be God’s people.

In two previous pieces, I attempted to survey how writers talked about ‘the people’ in early modern England, both in printed texts and in some manuscripts. What I found is that the phrase was used constantly, but that in the vast majority of cases it referred to a group that did not include the author. That is to say, relatively few writers identified themselves as part of ‘the people’.

Yet in 1535 and 1787, ‘the people’ themselves seem to be speaking. So who identified themselves as ‘the people’ in early modern England? And what sort of a ‘people’ was it? 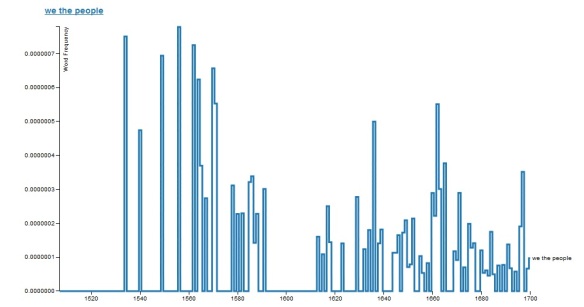 That particular phrase – ‘we the people’ or ‘we are the people’ – is very rare in this period. It is found in only 247 of the 44,315 transcribed publications on Early English Books Online, compared to over 22,000 for simply ‘the people’. The crude metric I used in my first post to measure the change in usage across time is even more crude when applied to such a rare phrase, but it does suggest that there are a few points when it was perhaps deployed more often, namely the 1560s-80s, perhaps the 1630s and again in the 1660s. However, I wouldn’t put much stock in this given the tiny numbers involved. Instead, it makes more sense to look at the context in which such phrases were used. A mechanically generated list of the words in context is a decent place to start, but to get a better feel for how it was used it is necessary to look at some specific texts.

The People of God

The decision to translate Psalm 95:7 as ‘we are the people of his pasture’ undoubtedly provided the most common example of a self-identification as ‘we the people’, especially in the sixteenth century, and there were a few related instances of ‘the people of God’. The way these were used varied considerably. In some cases, it seems like the author is presenting themselves as one of the Chosen People, specially favoured by God. However, in other cases the phrase is used as a warning. In 1583, for example, an English translation of Jean Calvin’s sermons asked ‘how shall wee be his people? It is not by saying simply with our mouth, Wee are the people of God: for the veriest hypocrites will boast as much as that’. Evidently it was dangerous to assume that ‘we’ had any predestined divine favour.

Instead, it was most often used almost as a synonym for ‘believers’ or ‘Christians’. We are the people of God because he created us and sent Christ to redeem us, not because he owes us anything. Still, this suggests that many were identifying themselves as part of a particular collective group. Quite simply, they saw themselves as a Christian people.

The People of England (or Wales)

Writing in 1554, an anonymous Marian exile claimed that God threatened punishment upon ‘we (the people of England)’ with ‘the devourynge swerde’ for their sins. Fifteen years later, now under a protestant monarch, another preacher asked his audience to consider ‘how exceedingly we the people of Englande are bounde in this greate benefite (among infinite other) to Almightie God, that wee be subjects under sutche a most gracious Prince’. Both these clergymen presented themselves as part of the English people, and this was hardly unusual.

Here we see the notion of ‘the people’ as the population of a particular place. It may seem a relatively straight-forward definition, but it actually has some interesting implications. It elided differences, making no distinction between clergy and laypeople or rich and poor. In the many cases where ‘the people of England’ were specified, this emphasised the writer’s national identity at the expense of their local or social identity.

This can be seen even more clearly in An Humble Supplication to the Queen and Parliament published by John Penry in 1587. He, writing as on ‘the behalfe of the countrey of Wales’, pleaded that the government send out more preaching minsters: ‘If we the people of Wales making our estate known, shall not have it redressed by this assembly, that then the ouerthrowe and weakning of Christes kingdome is intended’. Jesus Christ ‘now knocketh by this our suite, at the doore of the Parliament, to know whether we the people of Wales shall bee graunted [to] him, as his herytage’. In this supplication, it was the Welsh people as a whole, not just Penry himself, who were oppressed by the lack of good minsters. The entire nation suffered, so the entire nation pleaded for redress.

The fact that Penry’s Humble Supplication was directed at the Queen and Parliament draws our attention to another aspect of ‘the people’ as an identity, namely its potential social and political aspects. As I discussed in the previous posts, ‘the people’ were often conceptualised as ‘the demos’ in contrast to the monarch or the peerage. In 1591, for example, Samuel Cottesford was typical in suggesting that it would be best if ‘we the people may live in all obedience to our Princes & Governors’.

My favourite example of this form of ‘we the people’ is actually a satirical attack on the radical potential of this self-identification by Elizabeth Grymeston in her popular collection of poetry: Miscellanea. Meditations. Memoratives (1604). She momentary adopted the insolent voice of a violent rebel:

It was our Freedom to defend,

That We the People chose you,

And We the People do pretend

Our power of Choosing may extend

To punish and depose you.

Her answer to this democratic impudence was biting:

Were nought, but common Dung.

So We the People‘s us’d by you,

Who never had perhaps to do

With Choosing Right or Wrong.

Obviously Grymeston did not identify herself as part of the dungy people, but the fact that she thought fit to satirise it perhaps suggests that growing numbers of political reformers and radicals were speaking of themselves as ‘we the people’ by this time.

This was certainly the case by the mid-seventeenth century when we find some of the most dramatic examples of writers claiming to speak as ‘the people’, demanding new rights and greater representation in government. Others know much more about this than I do and it would take another thousand words to survey this change, but it will suffice to say that Gerrard Winstanley’s Declaration from the Poor oppressed People of England (1649) was radical in its claims but increasingly typical in its identification with ‘the people’. ‘We’, in this case, were ‘the commons’, traditionally those who were neither rich nor powerful enough to have a voice in government.

The voices of ‘the people’?

So do these translations, sermons and pamphlets represent the true vox populii of early modern England? I rather doubt it. The very fact that that their authors were literate and well-connected enough to write such texts and find publishers willing to print them indicates that they were part of a tiny minority within a much poorer and less fluently literate majority. Most of ‘the people’ had no such opportunities to leave their mark on the public record.

We may hear something a bit closer to voices ‘from below’ if we listen in on the words recorded in prosecutions for speaking sedition. In 1681, for example, John Rouse said that if Parliament ignored them, then ‘they the people of England had yet another way to effect their designs; which was by force of Arms to compel his Majesty to condescend to their requests’. Almost a decade later, after a new king had seized the throne, a former soldier named Farrell reportedly said that William III ‘pretended to come to rescue the people liberties & properties but in stead of that he came for the Crown’. Both Rouse and Farrell appear to have seen themselves as part of ‘the people’, oppressed by an unjust ruler.

Are we now any nearer to knowing who were ‘the people’ of early modern England? Well, researching and writing these posts has convinced me that this category was more meaningful and more multi-faceted than I’d assumed when I began. (This was, in fact, only supposed to be one short post.) It could mean many things: the laity, the population, the governed, the commons, the workers. It usually meant the majority in contrast to a privileged minority, though it could take on an even broader sense through its frequent association with the nation as a whole.

Yet I am hesitant to pat myself on the back and start using ‘the people’ as a catch-all term for those below the elite, as a convenient replacement for ‘plebeian’. As we have seen, it is much more difficult to find individuals outside the highly literate minority using this term. Did they identify themselves as part of ‘the people’? Maybe on occasion, but probably only in very specific and unusual situations, such as during the political debates of the mid and late seventeenth century. Most of the time, their identity would have come from other sources: their gender or marital status, their wealth or occupation, their town or parish. To get a sense of these, however, one must do more than search through a bunch of printed books and some transcribed manuscripts. The archives beckon…