Once you start looking, it is surprising how many politicians, poets and pioneers have found the answer to the question ‘what kind of society do you want?’ in Scripture, taking as their model the New Jerusalem described by John of Patmos in Revelation. John’s ecstatic vision predicts that following Judgement Day, New Jerusalem will be the earthly location where all true believers will spend eternity with God. This heavenly society became the model that people would evoke for centuries to come. Why was it so enduring?

Ideal Aspirations for All

As we saw in the previous post, the concept of a New Jerusalem is not static, it is a flexible idea that is taken up and defined according to the historical context it is used in, and in line with the intentions and aims of the person evoking it. It can be used to support the establishment of racial equality, the welfare state, or (perhaps?) resistance to industrialisation. But in each of the examples I discussed, you can see that the New Jerusalem is something to aspire to, it is an ideal society, a target, a goal. It is a place where injustice, discrimination and fear have no place, and where people can develop to the full, in co-operation with others.

There may be troubles ahead – suggest donning God’s armour. And also real armour.

The other common element of the quotes is that they all look forward to the establishment of New Jerusalem at some point in the future. In the meantime, it is clear that working towards New Jerusalem will be a hard and perhaps dangerous venture, and that people will need to work together in order to achieve it – ‘we’ve got some difficult days ahead’, but ‘we are a great crusading body, armed with a fervent spirit for the reign of righteous­ness on earth’. Thus New Jerusalem is a long term goal as well as a potent rhetorical device. Most importantly, it is an idea that is used to inspire and bring about social change – to transform a beleaguered or corrupt society into one that is better – more religious, more peaceful, more productive, more morally correct, more whole. Thus the purity of the end goal justifies the suffering and conflict that the journey towards it will entail.

What’s all this got to do with the Reformation?

I began my first post by explaining that the module I have been teaching this term is called ‘A New Jerusalem: Being Protestant in post-Reformation England’. I want to conclude by discussing how the concept has assisted in structuring and framing our discussions over the past months.

Detail from frontispiece of Samuel Lee’s Orbis Miraculum, or the Temple of Solomon (1659, 1665)

In the early part of the sixteenth century, Christians across Europe came to see their own societies as corrupt and problematic. They protested against the existing status quo and designed schemes and strategies to transform it. Some envisaged a programme of social and religious change that would fundamentally reform their societies to eliminate error and promote godly living, godly governance and godly people (reformation). These reformers also took as their model New Jerusalem – they would start over, building a new society along the lines set out in Scripture during or shortly after Christ’s time on earth. Although they were not the first to attempt to carve a better path to a conceptual New Jerusalem, the concept came to potent fruition in an era when religion provided the moral, intellectual and political framework for Western Europe.

In England, the idealism of reformers, in combination with the endless dynastic troubles of the Tudor regime, resulted in a reformation like no other in Europe. The integration of the social, religious and political spheres in the early modern world meant that the transformation of religious life was to have profound consequences for the cultural life of the nation and its people. And that’s what I have been exploring with my students over the past two terms. We have been privileged to focus on the lives of those living through the period c.1560-1700, uncovering what it meant to ‘be Protestant’ in an era motivated by establishing a New Jerusalem in England’s green and pleasant land. As with their predecessors and successors, the reformers were to discover that reshaping society was no easy task, a fact perhaps best illustrated by the failed experiment of the ‘Godly Republic’ of the 1650s. Yet they did not give up the struggle however hopeless their cause appeared.

England 1680: Building up the walls of Jerusalem[1]

All this explains why, in July 1680, Ralph Thoresby’s dissenting minister, Mr Sharp, felt it expedient to deliver a sermon on the theme of ‘praying for the peace of Jerusalem’ (Thoresby is the pious antiquarian whose life I am currently researching, find out more about him here). Mr Sharp advised his hearers to first reflect upon their own sins, which ‘have been judgemental to procure these judgements that have faln upon the Church’. He warned his congregation to ‘shake off your security; [for] never since the establishment of Protestancy amongst us, was there such grounds of fear’. Like many who have evoked the concept of new Jerusalem, Mr Sharp was concerned for the ‘gasping state’ of his society, and he exhorted his hearers, like David, to ‘build up the wals of Jerusalem, for though it was but newly built and repaired and no fear of enemies, yet David knew ful well that a Princes sins would make great breaches in the strongest fortifications’.

To understand the full significance of Mr Sharp’s sermon, it is also necessary to fill in the context of the age. In 1680 the religious and political landscape of England was typically fraught, for in the late 1670s a political emergency had developed around the issue of royal succession. Charles II had failed to produce a legitimate heir, so his brother, the Catholic duke of York (soon to be James II) was next in line to the throne. Following the revelations of the supposed Catholic ‘Popish Plot’, Whigs in Parliament had attempted to erase the duke of York from the line of accession in 1679 – these and subsequent attempts to exclude him are known to history as the ‘Exclusion Crisis’. But Charles II managed to brave out the crisis and he successfully quashed all attempts at exclusion. As royalists rallied to his cause he opted to dissolve Parliament and rule without it for the final years of his reign until his death in 1685. 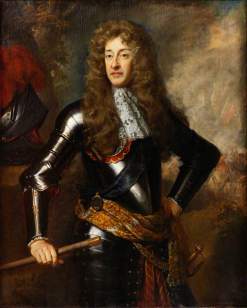 The Duke of York, soon to be James II, destroyer of New Jerusalem.

To return to Thoresby – after the first Exclusion Parliament had been dissolved by Charles II in 1679, new elections had been held in the provinces, resulting in a Whig landslide. In response, the king repeatedly prorogued the Parliament until October 1680. Thus Mr Sharp’s sermon was delivered at the height of the Exclusion Crisis, when Parliament had been elected but postponed by Charles and when uncertainty about the future was rife. To many, the Stuarts had seemingly returned to their old, illegal and destested ways, adopting an arbitrary ‘Personal Rule’ that tended to favour Catholics much more than many English people would like. In such circumstances the need to build up the walls of Jerusalem was especially imperative, for ‘the Princes sins’ (which could belong to either Charles II or his brother) might yet destroy all that had been achieved in post-Reformation England. Many Whigs were dissenters like Ralph Thoresby and the minister Mr Sharp. This explains Sharp’s claim that ‘never since the establishment of Protestancy amongst us, was there such grounds of fear’, and his reference to the ‘gasping estate of the Protestant religion’. Threatened by popery – arbitrary, pro-Catholic government – Jerusalem was in imminent peril in the minds of the dissenters.

Mr Sharp’s solution is also revealing. He advised that all should:

consider your near relation to Jerusalem, she is the mother of us all, the nearness of the danger of the Church is in all, all our private cases as the several cabins in a ship are all interested in the churchs prosperity, Jerusalems cause is the cause of God himself and therefore it shall certainly prevail at last.

Once again, some familiar features are associated with the New Jerusalem. We see a vision of individuals working collectively to achieve their aims, we get a sense of the long struggle that will precede the final achievement of those aims, and an unshakeable conviction that those aims will be achieved at last – of course there is no room in such ideological polemic for doubt. At the end of notes he has made on the sermon, Thoresby also introduced a more nationalistic strain that complemented Sharp’s more irenic defence of the church. He wrote:

Lord, imprint these things upon my heart and help me (as I desire) to pray for this poor fast decaying land, and good lord hear the prayers of thy people in that respect, for Christ’s sake amen.

It is hard to know if the antiquarian would be heartened or despondent to find social reformers centuries later singing the same refrain.

[1] My thanks to the Yorkshire Archaeological Society for their permission to reproduce material from Ralph Thoresby’s papers. The entry referred to is YAS MS21, Ralph Thoresby’s diary 1677-83, pp. 142-144.

6 thoughts on “Aspiring to a New Jerusalem: how to reform a society, Part II”