Last week, I delivered the introductory lecture for a second year undergraduate module, ‘Doing History’, and for various tedious reasons, I also recently spent some time reading, reflecting on and writing about why I consider history to be valuable. In the process, I conducted an entirely unscientific google trawl, trying to gauge what the general perception of the discipline was. I was struck by the fact that the popular or ‘commonsense’ perception of history encourages a rather limited assessment of its social and intellectual usefulness. What exactly do I mean? 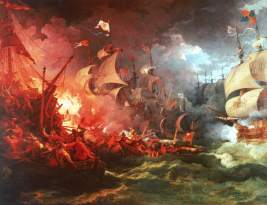 Drake’s defeat of the Armada – a rollicking yarn!

That’s nice, but it doesn’t make history particularly valuable. Anyway, the best stories are made up ones.

Back to the future

Perception: history provides us with ‘lessons’, and if we learn our lessons well we can avoid the mistakes of the past. Or as George Santayana may have said: ‘those who do not remember the past are condemned to repeat it’.

This one just isn’t true. Since historical events are the result of a complex stew of choice, chance and human agency, the past does not repeat itself (for example, see: the course of human history). This makes cross-chronological historical comparisons rather frustrating and futile.

Is the English pub part of our history? Maybe – but this one is German.

Perception: history can tell us ‘where we came from’, and allows us to understand what’s going on in the world today.

Undoubtedly there is more truth in this idea, but it is also problematic. Viewing the past purely in terms of present priorities greatly distorts one’s perspective – are we meant to merely ignore the losers, the dead-ends, the silences and the obsolete in the past, since we cannot see their value to the present? And does this mean that modern and national history is much more important than European, international, or pre-modern versions, since the influence of these on the present appears to be greater?

The problem with these general understandings of history is that they are all based on a perception of history as ‘knowledge’ – a collection of facts or narratives about ‘things that happened’ in the past. This is the type of history that is generally taught in schools, hence these popular perceptions, yet it significantly limits the perceived worth of the discipline. A more accurate understanding of what history is considerably expands its utility. Historical training certainly provides a student with knowledge about (some of) the past, but it also instils in the student patterns of thought and action, some of which are unique to the discipline. For the reality is that history is not the neutral recitation of facts about the past, it is the study, and explanation of events or phenomena. History is not merely about content (facts), it is also a particular and systematic methodology, a distinctive way of reading, thinking, questioning and analysing. Sam Wineberg described historical thinking as an ‘unnatural act’, going against the grain of our usual thought processes.[1] As a result, doing history/thinking historically is an intrinsically valuable thing, of value outside of the academy. Below is my summary of the most important features of the discipline, that in my eyes indicate its distinct value – do you agree? 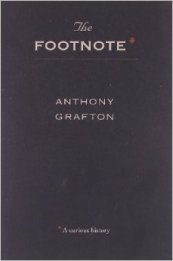 Good historians draw conclusions based on evidence. They reference this evidence clearly in their writing, in order to support their claims (usually by means of footnotes or endnotes, and bibliography). This is not simply because academics must adhere to the conventions of their profession. It is the breadcrumb trail that allows others to check the evidence to confirm what the historian has said, or in order to disagree with the interpretation that has been offered. The footnote is intimately tied to the development of professional history, so much so that a history has been written about it.[2] If it were not for the footnote, then the work of holocaust deniers such as David Irving would be just as credible as those who offer alternative interpretations – it would be impossible judge the value of any history.[3] Most people these days think this sort of scientific rigour is a good thing.

II. Reading the lines, reading between the lines

Facts are just a starting point, and they are not as easy to find as you might think. A historian reading a text will not treat it as a passive receptacle transferring information from the author to the reader. They will ask a series of questions about authorship, genre, audience and so on, and they will cross reference the text with other material in order to try to fully understand the significance of its content. Imagine if everyone approached their daily newspaper or Prime Minister’s Questions in the same way: might this improve the quality of political debate?

A historian seeks not only to describe, but also to understand and explain. She is trained to recognise that there are no simple explanations for events, only the stew of chance, choice and human agency that I referred to previously. If the past is a social laboratory, a storehouse of information about how people and societies behave, the ‘lessons’ that it teaches us are that causes take many forms, work at different speeds, and interact with each other. Studying the past encourages us to recognise and account for complexity in our own world, and provides a technicolour understanding of society, rather than a monochrome one. It prompts the student to think around a problem, to identify competing interpretations, and to form their own opinions based on critical engagement with evidence. 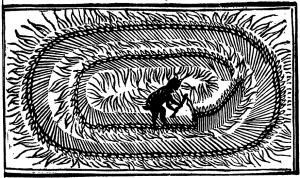 This mowing devil creates an evil subversion of the English lawn.

History teaches the student of the ‘otherness’ of the past and the danger of assuming that there is something ‘essential’ about human experience. This idea is captured in L.P. Hartley’s famous soundbite: ‘the past is a foreign country, they do things differently there’.[4] The past may look a little like our world, but it is infinitely distant to our own. The ‘mentality’ of those in the past is distinct from ours, and therefore we must avoid anachronistically projecting modern understandings onto it: the past must be ‘taken on its own terms’. For example, take supernatural belief. In the early modern period, almost everyone believed in the reality of an invisible world, and that supernatural agents (angels and demons) could interfere in daily life on earth. It is tempting to snigger at such ‘credulity’ now, thinking how ‘superstitious’ and ‘backward’ these strange ideas were. In doing so we apply contemporary standards to a past age. But such a judgement is rather pointless since from it we learn nothing, and besides, the historian’s job is to suspend judgement in favour of understanding – another unnatural act. Thus a proper historian would take such belief seriously, seeking to understand those ideas within their cultural framework, and to explore why people believed such things, and what this can tell us about this ‘foreign’ society. Difference therefore alerts us to divergent world views. Focusing on those things that seem strange or bizarre to us might provide a deeper understanding of the mental frameworks (structures) of other societies. Recognising that cultural and moral standards are relative is another key insight that should be part of the good citizen’s toolkit.

V. ‘Now’ is not a timeless truth

Long term causes interact with, perhaps encourage, perhaps retard, short term events. Change, or ‘progress’ is not inevitable and therefore also needs explaining. Equally, persistence is not ‘normal’ and we must also seek to account for it where it is found. To deal with the past effectively it is important to be able to recognise that historical myths or ‘popular’ ways of thinking taint the way we view and think about things. Most people conceive of history as a line or arrow, pointing in the future, without appreciating that this produces teleological, linear histories. Yet now historians might argue that history is more like a tree, a ladder, a spiral or even a braid.[5] Although it is unnatural to us, we must resist the impulse to see historical development as ‘normal’, and instead we must deconstruct it in order to make it explicable. The good historian knows the notion that we are all ‘moving forward’ is a social construction, not a natural thing, and that our own mental conceptions also have a history. [It also accounts for my particular hatred for this nasty piece of management jargon].

VI. History is… being human 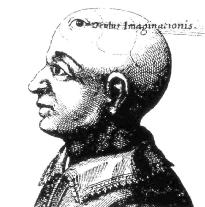 History is representative of our whole culture, it is one of the things that sets us apart from other animals. We are aware of our place ‘in time’, and we remember individual and collective pasts as a matter of course. That is a natural act. Those who are cut off from their own past and memories by a condition of the brain are often regarded by society as lacking identity, unable to function as ‘normal’ people.

In sum, the discipline of history develops qualities of perception and judgement that encourage active, reflective, and reasonable engagement with other humans. It turns out it is a very precious thing indeed.[6]

[1] Sam Wineburg, Historical Thinking and Other Unnatural Acts: Charting the future of teaching the past (Philadelphia, 2001).

[3] For a thorough decimation of holocaust denial based on primary evidence, see Deborah Lipstadt, Denying the Holocaust: The Growing Assault on Truth and Memory (London, 1993).

[5] For further discussion of the way that history is envisaged, see Penelope J. Corfield, Time and the Shape of History (London, 2007); and Eviatar Zerubavel, Time Maps: Collective Memory and the Social Shape of the Past (London, 2003).

[6] The good historian would recognise that the identity of the author and the intended audience for this post makes any other conclusion highly unlikely – though this fact alone does not negate the validity of the conclusion.

30 thoughts on “What is history for? Or: Doing history/thinking historically”