Our next post in ‘The Voices of the People’ symposium (full programme here) is by the many-headed monster’s very own Laura Sangha, Lecturer in British History 1500-1700 at the University of Exeter. Laura shows that whilst the voices of ordinary people were not thought to be as trustworthy as those of gentlefolk in the early modern period, they still played an important and often overlooked part in intellectual debates surrounding ‘science’, as the experiences of humble individuals were sought out and valued by intellectuals as evidence against which to test emerging theories.

The idea at the heart of this post is voices of the people in unexpected places. Whilst there are more traditional topics (such as poverty, crime or work) that provide opportunities for exploring and uncovering ordinary voices, I want to focus on an area that is traditionally thought of as the exclusive preserve of the elite. That is, the realm of ‘science’, or, if you are an early modernist: the areas of natural and mechanical philosophy. When we think of this domain, we envisage the gentleman practitioner, the well-educated, well-resourced intellectual elite, usually engaged in a conversation with someone from a similar background to himself. Yet I want to suggest that even here, in an area that initially appears to be completely cut off from the people, their non-elite contributions were sought out and valued, and the voices of the people resonate. 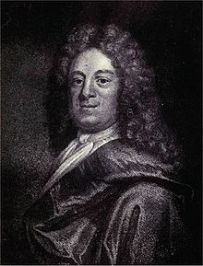 I will be supporting this suggestion with reference to my current research into the life of Ralph Thoresby.[1] For those of you who are not familiar with the man, a brief introduction. Thoresby lived from 1658-1725, he was from a middling, trade background, but he was also an antiquarian, a member of the Royal Society, and the owner and curator of a museum in his home town of Leeds. His archive is very extensive and includes the diary that he wrote for the entirety of his adult life, as well as a large set of correspondence with friends, family, and the great and the good in ecclesiastical and intellectual circles. Thoresby was therefore a respected provincial practitioner, inspired by the Royal Society to the study of antiquities, natural curiosities and strange weather – the stuff of early modern science.

There is a plausible case for saying that Thoresby himself was one of the people – though he was relatively well off, he did not attend either of the universities and was a long way from the intellectual heart of the country in the south east of England. But in this post my focus will be on the way that Thoresby’s scientific activities bought him directly into contact with (even more) ordinary people’s experiences and voices. 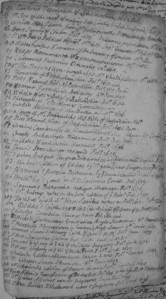 Thoresby was an autodidact who predominantly kept up with scientific development through extensive reading. He both read and contributed to the journal of the Royal Society, but he was also familiar with many of the most important publications of the time that he bought, borrowed and copied from extensively. A list of contemporary works in Thoresby’s papers indicates that he was familiar with the cutting edge intellectual thought being produced at the time.

Simon Shapin has argued that in this work, ‘gentility’ was directly linked to the constitution and protection of truth. What this means is that the definition of gentility at the time implied a conception of truth, so those practitioners and authors who were not of the gentle classes could not be expected or trusted to speak the truth.[2] Shapin’s interpretation has not been without its critics, and Thoresby’s response to his reading provides another counterpoint to it. For not content with merely reading and accepting this gentlemanly intellectual voice, Thoresby placed just as much value in gathering his own evidence and carrying out his own investigations. When he was collating this data he not only sought out and attended to ‘gentle’ or ‘genteel’ evidence, he gathered and took seriously the voices of the people as well. 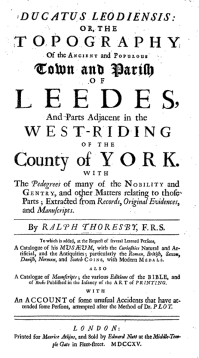 Thoresby was particularly interested in unusual and preternatural occurrences, and he included an entire section listing ‘unusual Accidents that have attended some Persons’ in his history of Leeds (pictured on the right), which was published in 1715. Thoresby was interested in such unusual events because they provided evidence that contradicted the mechanical philosophers that he was reading. It is evident that he saw these ‘accidents’ as providential evidence of the existence of the supernatural and by implication, the divine.

In putting his collection together, Thoresby had spent time visiting local people to gather accounts – evidence – of unnatural events in the world. Though the resulting accounts rarely give us unmediated access to the voices of the people they do preserve their experiences, and even if we do not capture the voices directly, it is surely significant that these voices were consulted, their evidence was valued, and subsequently carefully recorded and disseminated.

Thoresby visited many people himself to gather evidence: he included countless examples in his collection that he had personally uncovered. He frequently stated that the people he spoke to were ‘of this parish’, ‘in this town’ or ‘of this neighbourhood’, suggesting that he knew of and had spoken to the people individually. To give a couple of more detailed examples: in September 1722, Thoresby visited his cousin Aldburgh, then on his return he stopped to talk to a Mr. Sagar, who gave him ‘an account of the apparition himself saw’. Similarly in 1724 Thoresby described ‘going abroad to get the relation of the apparition of Thomas Parkinson… from his nearest relations’.

Thoresby also received letters from a variety of people who forwarded information that they had gathered from various people in turn – so one case came through ‘Mr Priestly’s conversation with a beggar boy’. 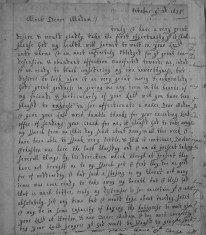 Another intriguing example is the case of Elizabeth Rodes, which captures a women’s voice. Thoresby knew about the case from various sources, but particularly because he had a letter in his possession which had been written by Rodes to her Aunt. This letter survives in Thoresby’s papers. In it it Rodes related that:

it pleased God to take away my speech from me (this day… about noon) & all this week I have been able to speak very little, and still it continues.

An attached postscript added that after the letter was written, Rodes was wholly deprived of her voice,

yet if a Bible was opened to her, she could read audibly, but as soon as it was closed she was mute as before.

There is a fascinating dynamic here: Elizabeth’s voice in the letter described her loss of a voice in daily life, but her relation of this loss was also the occasion of her voice being preserved for posterity… I don’t want to get too sidetracked though, so I will stick to my main point here.

Importantly Rodes’ letter indicates that it was not just Thoresby that was operating in this way, since whoever sent Thoresby this account was also an interested party – a number of the antiquarian’s associates evidently similarly valued the experiences and evidence of the people. My final example reveals this broader network of interested parties who were also gathering the voices of the people. 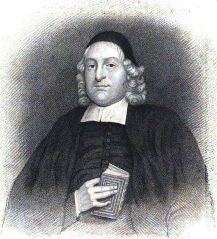 On 2 January 1699, the well known dissenting minister Oliver Heywood wrote Thoresby a letter with an enclosure entitled ‘A Relation of a young man slain with thunder and lightning December 22, 1698’. This enclosure described events that had taken place a week or so earlier, when a young mason and his father had set out to gather in some corn in a field near Halifax. The younger man was in a barn when it was struck by lightning and he was killed, his garments torn to small shreads and his ‘clogges driven from his feet’. Oliver Heywood wrote that he ‘had the account’ of the event from a Mr Mathew Smith who lived in the neighbourhood, in turn Smith had the account from the young man’s father himself. This explains why the account includes what appear to be the actual words of the young man: ‘the young man said, ‘I think it will rain, I will goe and gather some of it in (a late harvest)’. In his letter, Heywood gave permission for Thoresby to make what use of the account he pleased.

A little later, on the 17th of that month, Thoresby received another letter, from Jabez Cay, a Newcastle physician. Cay thanked Thoresby for ‘the strange relation of the young man killed by lightning’, indicating that Thoresby had sent another copy of the account to the physician. Thus we see clearly how these men recovered ordinary voices, recorded and then amplified them through a network of interested provincial practitioners who found much of value in the contributions of the people.

As new ideas came to life and were tested and authenticated in the laboratory of Thoresby’s local society, Thoresby’s neighbours and acquaintances were important resources – they were not excluded because they were not part of the culture of gentility. Although it is easy to assume that intellectual development is an exclusively elite sphere, this case study suggests that ordinary people’s experiences and voices are the unknown and often unrecognised contributor, often because they are unlooked for.

I want also to make clear that this is not simply because Thoresby was naïve about his selection of reputable witnesses. It is not hard to find evidence that Thoresby valued the testimony and experiences of his social superiors over that of other more lowly voices, as befitting a man of his time. The ‘voiceless’ letter writer Elizabeth Rodes may have been female, but she was also the niece of the Countess of Strafford. But I am not arguing that Thoresby ignored the connection between truth and gentility entirely, merely that his construction of the truth could also incorporate the voices of the people, where it was considered appropriate. Thoresby and his circle were actually quite discerning about the evidence that they felt safe to place their confidence in. In 1703 a minister from Newcastle wrote to Thoresby about his enquiries into a certain ‘Mr Forster’s dream’. Bradbury wrote that although had heard the story from several hands, but he was not satisfied of its veracity, for the

story always wanted that pureness and authority that a man would value. There’s talk enough of it, but it is with that variety… and inconsistency that I know not what’s true, and what a sham. If I can meet with any satisfactory account, you shall have it.

Evidently a criteria was being applied to the evidence that Thoresby and his associates encountered, with the result that, when it was considered proper, the producers of scientific truth need not be exclusively gentlefolk.

With regard to the Voices of the People, as well as thinking about who is speaking and why they are speaking (or why they are silent), we must consider who is listening, how people’s voices were heard, and why they were endorsed or rejected. Thoresby’s antiquarian adventures also suggest that we must be sensitive to those occasions when the peoples’ voice intrudes into unexpected areas where they would not normally be detected. Thoresby deliberately looked for and listened to the voice of the people during his lifetime, now the historian has the capacity to make sure that those voices continue to be heard.

[1] My thanks to the Yorkshire Archeological Society for their permission to reproduce material from the Thoresby papers.

4 thoughts on “The antiquarian listens: unexpected voices of the people”