This post in our After Iconophobia Online Symposium comes from Jan Tasker, an AHRC M3C-funded PhD student based at the University of Birmingham’s Shakespeare Institute.  Jan is working with Martin Wiggins and Jonathan Willis on representations of the supernatural in early modern English drama.  Here she reflects upon the changing ways in which God was represented on the Elizabethan stage.

In 1606 the Parliament of King James I of England passed an act banning players from ‘jestingly or prophanely […] speak[ing] or [using] the holy Name of God or of Christ Jesus or of the Holy Ghoste or of the Trinity’, or risk a £10 fine.[1]  Following the Reformation God was not to be taken lightly, and such usage was considered blasphemous or, potentially, idolatrous.  However as Patrick Collinson noted in his seminal lecture ‘From Iconoclasm to Iconophobia’ God had apparently left the English stage more than twenty years earlier – or had he?[2]

My current research explores how dramatists across a variety of genres continued actively to explore the theological issues concerning supernatural beings, including God, during the period 1533 – 1642. In this early stage I have been identifying dramatic works that contain explicit supernatural elements of a potentially religious nature.  This blog will share these early findings in respect of the disappearance, or otherwise, of the Christian God.  The data discussed comes from an electronic trawl of Dr Martin Wiggins’ work for his ongoing British Drama: A Catalogue, including all known dramatic works (not just plays) written in the period 1533 – 1642.[3]

In Henry VIII’s reign, post-1533, thirty-three of the one hundred and fifty newly-written dramatic works explicitly involved the Christian God (just over 20%).  Of these, twenty-one are biblical.  However, God only appears in the list of roles in nineteen cases, just over half of those in which God necessarily has some involvement and less than 15% of the total works we know about.  Often the reference to God is really to Christ as God’s son, or in the plot as a prayer to God.  A similar pattern is evident in both Edward VI and Mary’s reigns.  So even early in the English Reformation, the physical representation of God on the stage was quite limited.

The decline in God’s obvious involvement in drama in Elizabeth’s reign is very noticeable.  In the early part of Elizabeth’s reign, 1559 – 1579, only thirty-three out of three hundred and seventy-four newly-written works referenced God (about 8%), largely clustered towards the beginning of the period. Similarly during the period 1580 – 1605 only thirty-six out of eight hundred and six (less than 5%) did.  Of course old works involving God continued to be performed, for example the city mystery play cycles, but these were increasingly being challenged by local authorities. 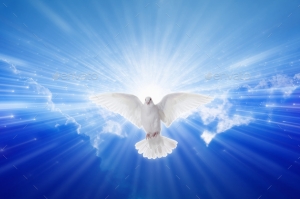 God’s explicit involvement with drama continued to decline thereafter but did not disappear completely.  Aside from plays produced at the English Catholic Colleges abroad, puppet shows continued telling Biblical stories, even during the Interregnum, and these may have directly involved God.  Certainly, a pigeon continued to be used to represent the Holy Ghost into the 1630s in such drama.  Equally, John Milton originally intended Paradise Lost as a play, evidenced by his extant detailed plot summaries for it, so even for the very pious, associating God with drama cannot have been complete anathema.

Furthermore, God’s participation in human affairs could be dramatized without his appearance. Jupiter’s intervention in Cymbeline (1610), for example, is clearly providential, enacting the Christian prophetic dream.  Additionally, the Shirley play-reading marathon which took place at the Shakespeare Institute during June and July 2015 revealed increased ascription of the vagaries of the plot to God’s providence, rather than, say, fortune, in the mid- to late-1630s.

Increasingly, drama may have assumed greater familiarity with orthodox Protestant doctrine and engaged with more complex religious debate, such as the interrelationships between different supernatural beings/events, and God.  This is suggested by the clustering of plays coincident with the publication of treatises and pamphlets involving similar discussions.  Frances Young notes the first official Catholic rite of exorcism was published in 1614 and records English treatises about possession and exorcism in 1622, 1623 and 1624.[4]  These were rare topics for plays.  Before 1559 there had been only three involving possession or exorcism – all Biblical.  1559 – 1589 saw a further three on exorcism, probably two in 1567 and one in 1588, linked explicitly to the defeat of the Armada.  There was then nothing until 1600 – 1607 when there were three more.  However there were a total of five in 1615 – 1616, one in 1623, three in 1624, and two more in 1626.  Note that there was a long period of theatre closure due to the plague in 1625 so there are far fewer new plays in that year.  My future textual analysis will investigate any connection between these.

Similarly plays involving witches and witchcraft do not really begin to appear before English theologians and scholars began discussing it from the 1580s.  In the period 1533 – 1579 there are only three plays with minor references to witches, including the Biblical Witch of Endor.  The first book in English to discuss witchcraft was Reginald Scot’s Discoverie of Witchcraft published in 1584.  It is notable that Lyly’s play Galatea, written in the same year, uses this as a verbal source.  In 1587 Gifford responded to Scot’s work, and another play referencing witchcraft was written – the first such since Galatea.  As pamphlets and treatises about witches increase in the 1590s so do plays.  Furthermore, as theologians increasingly associate witches with pacts with the devil, so plays begin to make this link for the first time, sometimes mockingly, suggesting engagement with the theology.

Whether this is more than coincidence, or simply playwrights making commercial ‘hay’ out of a topic of current interest awaits further analysis.  However I think the evidence I have presented indicates that whilst Collinson’s observation that drama ceased to have an explicit didactic religious purpose after 1580, has some validity, it did continue to engage with religious doctrine through its representation of the supernatural.  God was represented through the classical gods and reference to providence.  Drama responded to changes in theological practice at home and abroad.  Complex relationships between various supernatural beings were explored, giving consideration to both religious and traditional beliefs.  In short, from an early modern perspective, God’s omnipresence did not exclude the stage.

[2] Patrick Collinson, ‘From Iconoclasm to iconophobia: the cultural impact of the second English Reformation’ (Reading: University of Reading, 1986)