[In our series ‘A Page in the Life’, each post briefly introduces a new writer and a single page from their manuscript. In this post, Brodie Waddell offers a glimpse of the autobiography of a tradesman and emigrant who struggled to resist a variety of worldly temptations.]

Around the year 1630, a headstrong young tailor named John Dane decided to defy his godly parents and ‘went to a dansing scoll to larne to dans’. When his father found out, he was soundly beaten. So, Dane resolved to leave the family home behind and set out across Hertfordshire.

When he sat down to write his autobiography over fifty years later, he described what happened next:

although I thout my fatther was too strict I thout Soloman said be not holy overmutch and David was a man after gods own harte and he was a danser but yet I went [on] my Journey and was from him half a year befour he heard whare I was. I first settled in Barcumsted and there wrought on a shopboard that had been improvd that waie. On a nyte when most folke was abed a mayd cam unto the shopboard and sat with me and we Jested togetther but at the last she carried it so and put hirself in sutch a posture as that I made as if I had sum speshall ocashon abrod and went out for I feard if I had not I should have comitted folly with hir but I ofen thout that it was the prayers of my parents that prevaild with god to kepe me. I then gave myself mutch to dansing and staying out and heating myself and lying in haymowes the people being abed whare I abod, [so] that I lost my colour and never Recoverd it againe.

[Dane’s spelling was eccentric even by the standards of the day, so I have modernised the worst instances and added some punctuation.] 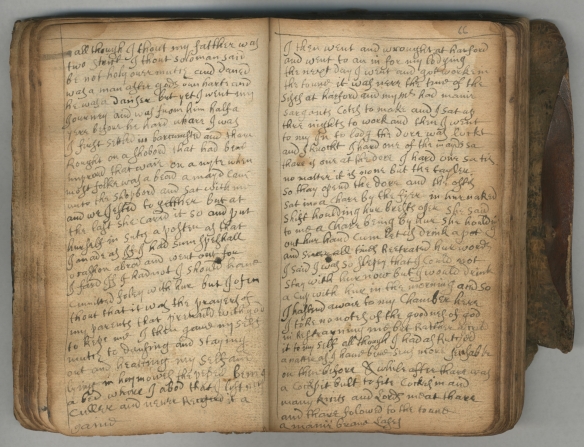 The events, if seen as merely as a small link in the chain of his longer life story, are clear enough. He complained of his father’s strictness, left home and arrived in Berkhamsted. There he found employment tailoring, sitting on a shopboard as was customary in that trade. One night he was interrupted by a maidservant who propositioned him and he was forced to make excuses to escape. He then got into the habit of late night revelry which permanently ruined his complexion. All in all, a mildly amusing story for a modern reader, illustrating the coming-of-age experience for one young tradesmen in seventeenth-century England.

However, if we look at it as a piece of writing rather than a purely factual account, a wider set of meanings emerges. Over the course of this single page, the tone of Dane’s narrative shifts jarringly several times, showing how even the most seemingly straightforward autobiography can digress from the expected route.

He begins by justifying his youthful behaviour by quoting scripture to prove that dancing was no great sin, for even King David ‘was a danser’. In this sentence, we can see the elderly writer channelling the filial resentments of his 18-year-old past self through his quill and into his notebook. Though he was supposed to be writing a godly retrospective, a part of him had still not forgiven his father for this act of violent injustice.

What comes next is an encounter with a maidservant that, for Dane, illustrated less ambiguous moral truth. When the maid interrupts his tailoring, he can’t help engaging in a bit of friendly banter with her and he is almost enticed into sinful sexual ‘folly’. He only just manages to turn away from the danger at the last minute. The story here becomes a parable of vicious feminine temptation and godly masculine resistance. What’s more, even after complaining about his father’s harsh punishment at the start of the page, here he attributes his ability to resist to ‘the prayers of my parents’.

Finally, in the last sentence, Dane shifts his perspective yet again. He continues to write in a providential mode, but now he presents a darker vision. Instead of a valent tale of sin defeated, the narrative becomes a rapid ride through a dissolute life and he closes with the physical scars that remain, leaving him providentially marked by god as punishment for his sinful ways.

John Dane’s life is interesting in itself. He grew up poor in Hertfordshire, had a variety of unusual experiences as a young tailor, moved to New England as part of the Great Migration of the 1630s, set up a farm there, called himself a ‘surgeon’ and survived major hardships before dying at the age of 72. It is the sort of life which we are lucky to have recorded.

Yet just as interesting, at least for me, is the fact that Dane decided to write it down, and the ways he chose to do so. As this page indicates, his narrative make most sense as part of the broader genre of the godly life story. He titled it ‘A declaration of remarkabell provedenses in the corse of my lyfe’, and he frames almost every incident as evidence of a divine hand, whether merciful or punitive.

It is not, however, a purely didactic text. Despite his constant efforts to impart spiritual knowledge, Dane’s story is a deeply personal one. The people he meets are real people, not simply allegories, and the demands of his working life feature prominently too. Even his own reported ‘thouts’ are sometimes ambiguous. Five decades after the event, his father’s violent response to Dane’s love of dancing was still remembered with gritted teeth.

New England Historic Genealogy Society, Mss A 1076 (commonplace book of John Dane, 1682), p. 65. A transcription of the autobiography, which excludes most of the material in the notebook, is available in ‘A Declaration of Remarkable Providences in the Course of My Life: By John Dane, of Ipswich, 1682’, The New England Historical and Genealogical Register, 8 (April, 1854), pp. 149–156. A brief summary of his life is available on WikiTree.

2 thoughts on “A Page in the Life of John Dane: A Tailor Tempted by Dancing”