Laura Sangha writes: I am delighted to introduce a very special pair of posts written by guest blogger Robyn Noble. Robyn currently works at the London Palladium but not so long ago she was studying for her BA in History and Philosophy at the University of Exeter, where I had the great fortune of teaching her sixteenth- and seventeenth-century religious history. Robyn and I have stayed in contact since her graduation and recently we have been discussing her exploration of her family history. Fascinating in isolation, it became clear that Robyn’s research touched on many of the regular themes discussed on the many-headed monster, particularly relating to life-writing, history from below, and social identity. Robyn was enthusiastic when I suggested that she should write something about it for the blog, and these two posts (the second part will be published tomorrow) are the result. Whilst not an early modern life, by drawing on and contextualising one extract from her great-grandfather’s journal, Robyn’s posts complement our ongoing ‘Page in Life’ series, since it explores a text that tells the story of a life in a self-conscious way.

Last year, whilst researching my grandfather, an Indian man whom I never knew, I stumbled upon his whole extended family. An avid diary writer myself (I have filled nineteen notebooks in just under ten years), I was ecstatic to learn that my great-grandfather, Bharat Chandra Nayak, kept a diary which he wrote in every day. These diaries went on to form the basis for his published memoir, a book which my new-found family assured me would shed a lot of light on these relatives I had just discovered.

Bharat’s memoir, Mora Purbasmruti Katha (Tales of My Past Recollections) was written in 1964, and in 1967 it went on to receive the Orissa Sahitya Academy Award as a work of high literary value. As well as an autobiography, it is also a travelogue and a description of the social, political and economic circumstances in India throughout his life. In many ways, it is also an ode to topics very dear to him, including higher education for all members of Indian society, female emancipation and social reform in general. As it is written in Odia (or Oriya), the predominant language of the state of Orissa in which my extended family live, I am sadly unable to read the book myself, but I have slowly been receiving English translations of certain passages from various members of the family. The first passage I received throws light on one of the great family mysteries: why it is that my grandfather, Bibhu, had the surname ‘Dash’ as opposed to the family surname ‘Nayak’? 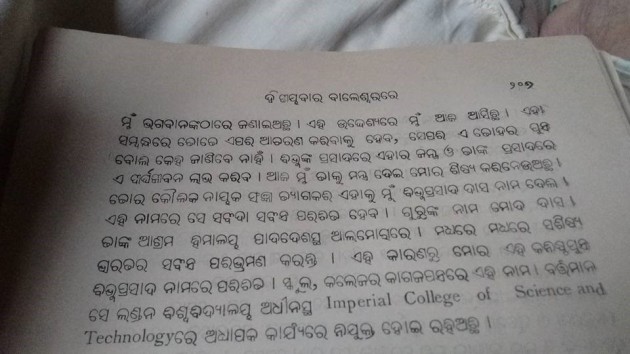 Transcription – I have included some explanatory words in square brackets:

My fourth son Bibhu Prasad was born at approximately 9pm in September 1931. On the morning of the next day, at around 8am, my Mantradata [otherwise known as a guru, or ‘Giver of the Mantra’] unexpectedly presented himself with four of his shishyas [disciples]. After receiving my obeisance, he asked me in his mother tongue, “Weren’t you blessed with a son last night?” I answered, “Yes. How could you know? But I never informed you.” He answered, “God revealed the child’s darshan [image or vision] to me, so I came.” He said he wanted to see the baby at that moment. Then, I took him to the labour-delivery room. Then he immediately took the baby in his lap, tossed him gently up and down, blew upon his ears and nose, and spent about an hour with him. Then he sat in meditation for another hour. Then he called me and said, “Listen, son! Your destiny says that you will not have a son. You have already lost two sons. It seems God has a different plan for the longevity of the son you already have.” (My son Satya Gopal was 17 years old by then). “I have already begged God for this child’s longevity. I have come here today for that purpose only. You will have to behave in such a way that no one should know that this baby is your son. The child is born as a gift of God, and it will attain a long life by his grace. I have initiated him as my disciple by my mantra. I have dropped your surname ‘Nayak’ by naming him as Bibhu Prasad Dash. He will be known everywhere by this name.

The Mantradata’s name was Moda Dash. His ashram [spiritual monastery] was at Almora in the foothills of the Himalayas. He had widely travelled all over India accompanied by his shishyas. My youngest son is known as Bibhu Prasad Dash for this reason only. His school record and all legal papers contain this name only. Now he is working as a Professor at Imperial College of Science and Technology, University of London.

This is not the first time that I’ve been told the story of why Bibhu was given away as a baby. The interesting thing is that the story my mother told me is almost completely different from the account that Bharat gives in his memoir. My mother never really knew Bibhu, her father. He divorced my grandmother when my mother was 10 years old and returned to India and, aside from a couple of letters in the immediate years after he left, she never saw or heard from him again. She told me that my great-grandfather had one son and then 10 daughters. As women were seen as inferior to men in India at the time, a great amount of importance was placed on the son, especially as the family had lost other male children shortly after birth. Just after Bibhu was born, the eldest son died, and it was believed that the two events were in direct correlation with each other. Bharat believed that the family was cursed when it came to male children and, as a result, Bibhu was also cursed. He therefore gave away his son to a local family and forced him to drop the family surname of ‘Nayak’, thus he adopted the surname of his new family.

When I told my family in India the story that my mother told me, they were quick to dismiss it as an incorrect version of the true account Bharat’s book gives us, an account that had obviously mutated over the generations. The result is that today there are two versions of the tale: one version that is the direct result of oral retelling (my mother’s), and the other which was recorded by the person involved (Bharat’s version).

This prompted me to reflect on the relationship between oral and written traditions of history. Generally speaking, oral history is information, stories and knowledge held within the memory or collective memories of a person or group of people. In order to pass on this knowledge, it has to be recalled from that memory and then passed on into the memory of another person or group of people. As this cycle repeats itself, oral histories may be falsified deliberately by certain groups of people, or be subjected to small changes through each retelling that, over time, render it rather different from the original (though the story may still tell us much about group identities and our relationship with the past). On the other hand, written history, generally speaking, is a historical narrative based on written accounts or other documented records such as photographs, deeds and laws. Written history tends to hold a lot more credibility than oral history as, while the latter can be altered over time, written history is rooted in evidence and can’t be changed, just reinterpreted or challenged and overturned.

I think, however, that diaries and memoirs blur the lines a little between these two traditions of history. Diaries or memoirs, like oral histories, often stem from someone’s memory and, whether intentionally or not, may contain an embellished or highly personalised version of events which later are mistakenly seen as authoritative, purely because they are written down. What is clear from the final line in Bharat’s account is that he was writing his memoir a good few years after the event and details may have been changed due to loss or distortion of memory. It is also important to note that Bharat was writing his memoir with the intention of publishing it. It is therefore not inconceivable that, if my mother’s account of the story actually came from her father via her mother and aspects of it are true, he may have changed some of the details in order to present himself and his actions in a more positive light. Is it really so easy to say which version is closer to ‘what actually happened’?

In this way, both diaries and oral accounts can sometimes make it difficult to determine the true nature of events. I decided to learn more about Bharat and Indian beliefs at the time, to see if this contextual evidence could shed any further light on the episode – you can read about what I discovered in part II.

1 thought on “What’s in a name? Fact and Fiction in Family History: Part I”