This is part 2 of a couple of posts written by guest blogger Robyn Noble. You can view the first post here.

Laura Sangha writes: I am delighted to introduce a very special pair of posts written by guest blogger Robyn Noble. Robyn currently works at the London Palladium but not so long ago she was studying for her BA in History and Philosophy at the University of Exeter, where I had the great fortune of teaching her sixteenth- and seventeenth-century religious history. Robyn and I have stayed in contact since her graduation and recently we have been discussing her exploration of her family history. Fascinating in isolation, it became clear that Robyn’s research touched on many of the regular themes discussed on the many-headed monster, particularly relating to life-writing, history from below, and social identity. Robyn was enthusiastic when I suggested that she should write something about it for the blog, and these two posts are the result. Whilst not an early modern life, by drawing on and contextualising one extract from her great-grandfather’s journal, Robyn’s posts complement our ongoing ‘Page in Life’ series, since it explores a text that tells the story of a life in a self-conscious way. 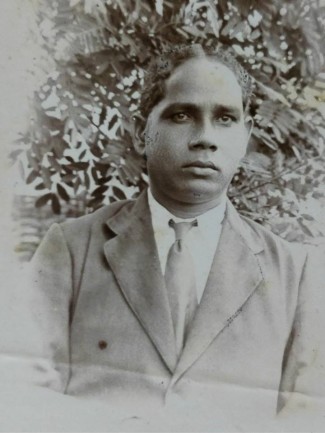 Bharat Chandra Nayak was born in March 1887 and was one of seven siblings. He married Sakrabati Devi and the family he created with her was orthodox in some ways, yet very progressive in others. For Bharat believed that independence for women could only be attained if they were given a modern education, which was unheard of in India at the time. From an early age, his daughters were given a lot of literature to read, and as a result they all had a love of the written word. Indeed, this is a trait which is still very much evident within the family, including for myself. Bharat later admitted them into a school where English was taught and both he and his daughters were subjected to shaming and social boycott as a result. All of the daughters went on to become at least post-graduates, with some becoming doctors, teachers and university professors. It seems unlikely then, that someone with Bharat’s broadminded view of women would have cared so little for his daughters that he would have believed his lack of sons to be a family curse. Rather, we find that Bharat was a man who was so devoted to his daughters that he was willing to face social ostracization if it meant that he could give them a modern education.

Furthermore, there is a lot of photographic evidence that Bibhu was in contact with his birth family – not only group pictures like the one below but also ones where he is joking around with his elder siblings. In one of the very few letters that Bibhu wrote to my mother when she was a teenager, he talks about how he went to India to visit his family, though the reunion was not as joyful as he had hoped as one of his sisters had a stroke while he was there. The very fact that Bharat was aware that Bibhu was a professor in London shows that they were very much in contact with each other; indeed, there are letters that still exist from Bharat to Bibhu and vice versa. This seems to suggest that Bibhu was very much a part of the family, something which I think would be highly unlikely if Bharat had believed Bibhu was cursed and had forced him to drop the family name.

The family: Bibhu (front centre) is surrounded by his sisters and his parents, who are seated behind him.

It is also the case that gurus carried a lot of importance in 1930s India; if a guru had told Bharat to give away his son, it is likely that he would have trusted him and done so. Receiving the mantra, or word of God, from a guru is one of the most ancient practises present in Indian society. According to Indian teaching, the role of the guru is that of a spiritual physician; they determine what a person’s spiritual needs are and then select a mantra that is appropriate for them in order to bring about balance. Many Indians had their own personal guru, though they may have had several throughout their lives. As far as Bharat was concerned, it was God who was telling him that giving Bibhu away was the only way to ensure his longevity, and his desire to protect his son could have been heightened by the fact he was told he would soon lose his eldest son, as well as having lost two sons previously. It is certainly interesting that Satya Gopal Nayak, the eldest son, died in 1948 aged 32 (therefore not a few months after Bibhu was born as my mother’s version of the tale states), whilst Bibhu lived into his 80s!

This exercise has taught me that, while we might be far more willing to jump to the conclusions written in someone’s diary or memoirs over stories of the same event passed down through the generations, we must be wary of doing so, even if, like in this case, the written account does seem the most credible. I also feel that even retellings based on memory that are no longer credible have the capacity to teach us a great deal. In the case of my mother’s version of the tale, I strongly suspect that it tells us more about the individuals who passed on the story than it does about Indian culture itself. Diaries can give us an interesting insight into the minds of people, what was important for them and their experiences of certain events, but this does not mean that their versions of events are more real than that of those who did not write their experiences down. Oscar Wilde once said that, ‘Memory is the diary we all carry around with us’. I think that one could also say, ‘Diaries are the memories that people write down’. They are different, but one is no more superior to the other. But, together with context, they can shed some very interesting light on history at the personal level. In my opinion, history is often like this. The specific event we are trying to learn about is contained within a wooden box; all we can do is peek through the glass windows that evidence provides us to try and understand what’s inside, even though that available evidence may provide very different angles. History is about aligning see-through boxes, which provide a lot more context, with the puzzling wooden one in front of you, and using this context to obtain a clearer picture of what the true versions of the events may be. But, at the end of the day, none of us can ever open the box and see for ourselves exactly what happened. All we can do is theorize – or, write histories, if you will.

1 thought on “What’s in a name? Fact and Fiction in Family History: Part II”