What did the state look like in early modern England? There are, of course, many different ways you might answer this question. The most famous is Hobbes’s Leviathan, in which the king literally embodies his subjects. Or, if one wanted to be a bit more realistic, an image of a court sitting might give you an idea of what the state looked like to someone formally facing its majestic authority. Or, as Jonah Miller has recently argued, perhaps the most realistic image of all would be a picture of a local constable, for these were the representatives of the state who ordinary people most often encountered in their daily lives. 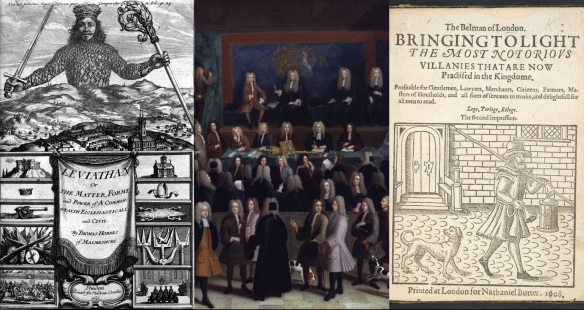 However, I’d like to offer a rather more practical, and much less aesthetically pleasing, answer. In one of the first sessions of my ‘Crime, Poverty and Protest’ module at Birkbeck, I try to give students an idea of what the court system – and in fact ‘the state’ more generally – looked like in the early modern period. So, I created a sort of tabular diagram in which I attempted to include on a single page all the most important components of this system that a student might need to know about. Here is the result as pdf and full-size jpg …

I then released the image to the #twitterstorians of the world to tell me what I’d missed and what I’d gotten wrong. Pleasingly, I had plenty of responses. You can go to the tweet itself to read them all, but I’ll try to summarise them below…

I'm introducing my third-year @BirkbeckHCA students to the joys of the 17th-century court system tonight.

Here's my attempt fit it all in one image. How much have I got wrong? pic.twitter.com/IwhOCwpaJF

Jonathan Healey: Distinguishing between the common law courts and the courts of equity [Note: an important distinction also mentioned by Emma Hart and Dave Postles]. I’d consider distinguishing between manorial courts and courts leet, and I’d probably nod to the regional courts: stannaries, Councils of the North and the Marches, Palatinate courts of Chester, Durham and Lancaster. I’d perhaps mention nisi prius too?

Dave Postles: The Court of Arches as the highest appellate jurisdiction in the ecclesiastical hierarchy. Matrimony and probate for the church courts generally. Also the role of civil lawyers, not just clergymen, in the church courts.

Else Churchill: For Court Court personnel I might add Registrars, Proctors and possibly officials such as apparitors and summoners.

John Levin: Courts of conscience [for petty debts]? Although there were very few pre-1700, and only a few more pre-1750, if memory serves.

Craig Spence: You might also include Coroners and their inquests, which includes some interesting jury activity and sometimes resulted in criminal indictments for murder/manslaughter.

Katie Barclay: The Assizes can also do civil business; it’s just less common. I’d also note that jurisdiction is something we’re much more concerned about than they were, where things often are tried in the ‘wrong’ place.

Richard Blakemore: High Court of Admiralty. Plus vice-admiralty courts – both in each county and in the colonies.

Steve Poole: Maybe add a little about decision making under ‘personnel’, chiefly the presence or non-presence of grand/petit juries, summary jurisdiction etc? And emphasise powers of borough QS varied according to wording in charters and were occasionally (and weirdly) capital.

TanyaBC: You might add a column for what forms of punishment are allowed to be administered by each. It becomes a major sticking point in criticisms of Star Chamber and adds some context about why certain crimes are tried where they are.

Mark Forrest: I would distinguish between court leet (royal court could be attached to manor, hundred or borough courts) and court baron (the right to hold a court baron defined the manor). Various local market, pie powder, hustings courts in towns…

So, if nothing else, the whole process was a useful reminder of the limits – perhaps even dangers – of trying to fit everything useful onto a single image. But, I think it might still be some use to some of you, especially if you keep in mind the responses above and, if you are a teacher, discuss them with your students. So, in the spirit of sharing, feel free to download and use the image (non-commercially) for whatever you might want, as long as you acknowledge the source.

And if you have more suggestions for things that should be included, please let me know in the comments below or on twitter!