A month or so ago I read Sarah Perry’s wonderful third novel Melmoth. Central to the book is the myth of Melmotka, a woman who witnessed Jesus’ resurrection, but who later denied that she had seen him. Since that time Melmotka has wandered the earth without home or respite, bearing witness to all humanity’s violence and cruelty, as she will do until Christ comes again.

The Stories of Story 1

In modern day Prague Helen Franklin traces the history of Melmotka through a collection of texts that speak of a wraith-like figure who appears at moments of great sorrow. The narratives found in these documents – a seventeenth-century letter, a contemporary manuscript, a twentieth-century journal – put flesh on the bones of Melmotka, a shadow that leaves bloody scarlet footprints where she treads, who is clad in some thin black billowy stuff, who stares with eyes that are like ink dropped into water… 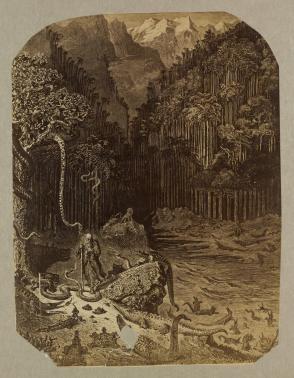 Perry’s inspiration is an 1820 Gothic novel by Charles Maturin, Melmoth the Wanderer, from which it draws both theme and structure. In Maturin’s story Melmoth is a seventeenth-century man who sells his soul to the devil in exchange for one hundred and fifty extra years of life. Regretting his decision, Melmoth the Wanderer spends that time fruitlessly searching the world for some other wretched soul to take over the pact for him.

The Stories of Story 2

Like Perry’s Melmoth, Melmoth the Wanderer is also comprised of a series of stories-within-stories, encountered in manuscripts that the central character reads, or from the lips of other characters that he meets.

Maturin’s titular character is a mix of pact-making Faust and the Wandering Jew. The latter is a mythical immortal man whose legend took a definite shape in the medieval period, from the thirteenth century onwards. Based on a combination of older stories current in the eastern Mediterranean and the Near East, the Wandering Jew was a man who taunted Jesus on the way to his crucifixion, and who as a result was cursed to walk the earth until the second coming. In European mythology the Wandering Jew has a variety of names – where German or Russian are spoken he is known as ‘the Eternal Jew’, in French and other Latin languages the name refers to his wandering, whereas in Finnish he is known as the shoemaker of Jerusalem.

Imagine my delight when I stumbled across two seventeenth-century ballads featuring the Wandering Jew, and which contained many of the details of the later remakes.

The first ballad is certainly less interesting. The Wandring Jews Chronicle; OR, The Old Historian, His Brief Declaration, Made in a Mad Fashion is told from the perspective of the Wandering Jew, but this is merely a literary device that allows the balladeer to get on with his true purpose, that is, reeling off a list of all the English monarchs since William the Conqueror. Though we learn almost nothing about him, the Wandering Jew often participates in the action to dramatic effect:

I also was at Bosworth field,
Well armed there with Spear & shield
meaning to try my force:
Where Richard loosing life and Crown
Was naked bourn to Leicester Town,
upon a Colliars horse. 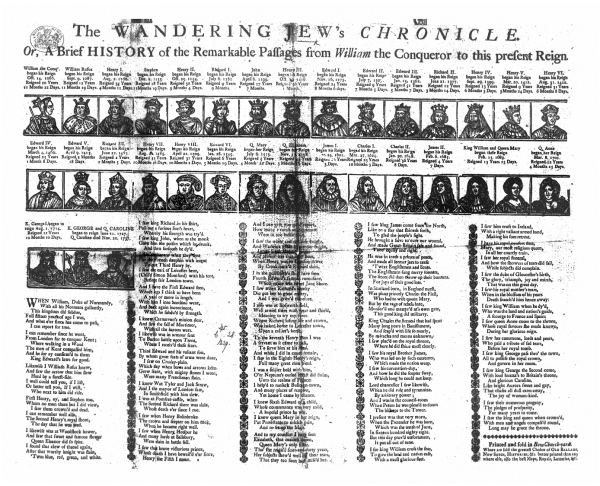 All images from the two ballads are taken from English Broadside Ballads Archive.

Some versions of this ballad came with a grand woodcut depicting all of the monarchs mentioned, making it both entertaining and educational.

Much more interesting is The Wandering Jew; OR, The Shoemaker of JERUSALEM, for this ballad relates the early modern version of the story. It begins in fair Jerusalem, ‘Where thousand thousands in the Street’ beheld Jesus dragging his cross to the site of his execution. Overcome ‘with blood and water-sweat’, Jesus sought for rest upon a stone, but he was driven mercilessly away by a man who mocked ‘thou King of Jews’ and pushed him away, declaring ‘thou shalt not rest here’.

At which our Saviour said,
I sure will Rest; but thou shalt Walk,
and have no Journy stay’d.

This cursed shoemaker (for it was he), witnessed the crucifixion, but afterwards his punishment for offering Christ this wrong was a compulsion to ‘wandreth up and down the World / a Runagate most base’. Bothered grievously by his conscience the man can find no resting place and no home, instead wandering perpetually, passing through ‘Nations strange’ in ‘Arabia, Aegypt, Affrica / Grecia, Syria and Great Thrace’, and Hungary. Since the lord had decreed that he would not yet see death, the Wandering Jew does not age. As he roams he evangelises, declaring the power of Christ and putting down idols. The Wandering Jew also speaks with ‘learned Men’ in Bohemia and Hungary about his lingering Days, ‘his Journies and his Ways’ (which must have been when he told them about all the English monarchs since the days of William of Normandy). 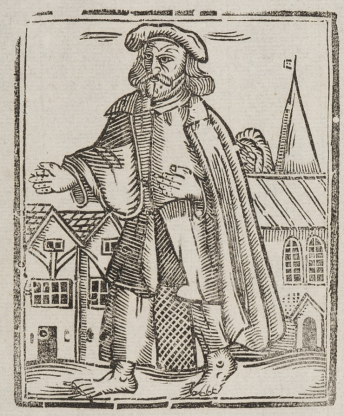 Though most iterations of ballad are the same, it is possible to identify two slightly different versions, where small changes to the text have a significant impact on the meaning. The effect of the changes is to amplify the anti-Semitic undertones of the tale. Both versions record how ‘the wicked Jews with scoffs and scorns’ persecuted Christ during his life and his execution. But while in one version the reader is exhorted to repent and ‘Do not (like this wicked Jew) / Despise Gods proffered grace’, in the other the reader is told to ‘do not like the wicked Jews’. The effect of this edit is a shift from a particular indictment of an individual to a general condemnation of the Jewish population as a whole. And while in the first version of the ballad the shoemaker merely witnesses Christ’s death (‘So when he had seen the precious blood / Of Jesus Christ thus shed’), the second version removes ‘seen’ to make the shoemaker, and by implication all of those aforementioned ‘wicked Jews’, directly responsible for Christ’s crucifixion:

So when he had the precious blood
Of Jesus Christ thus shed,
And to the cross his body naild.
Away with speed he fled

A number of copies of the ballad survive, and both are illustrated with evocative woodcuts showing a man in a hat and cloak with a cityscape behind. One man clasps a staff, the other strides forth in bare feet. The ballad’s tune was ‘In Peascod Time’, a melody that was also known as ‘The Lady’s fall’ and which was often paired with ballads that were woeful tales in which sinners received their comeuppance at the hands of a harsh but fair God (you can listen to a recording here). The ballad is one of those identified as a ‘bestseller’ by Christopher Marsh, so it was evidently popular and sold well – indeed, with its entertaining story, its woodcut and catchy tune, the ballad has all the elements of the type of successful product that early modern publishers valued most.

Gustave Dore’s The Legend of the Wandering Jew series ended with this depiction of the Day of Judgement. V&A Collections.

4 thoughts on “A Wandering Story of the Wandering Jew”