Our latest Postgraduate and Early Career Takeover post is by Daniel Phillips. Daniel is a College of Humanities funded doctoral researcher at the University of Exeter whose work focuses on the London Zoological Society and the British Empire, 1847-1903. Find him on twitter at @Daniel_Ph1llips.

Nearly everyone has seen Dumbo: the 1941 Disney film that tells the story of an elephant that learns to fly. The film not only parodies the relationship between mice and elephants with Dumbo’s only friend, Timothy Mouse, but also includes racially stereotyped crows and a drunken hallucination of pink elephants.  However, what is less well known about the film, is Dumbo’s real name. In her only line of the film, Dumbo’s mother is asked to name her child and, in response, Mrs Jumbo names her child Jumbo Jr. Like every good story, Dumbo has a basis in truth. Namely, a real life elephant called Jumbo who led an extraordinary life.

Historians are beginning to reassess the human centred conditions of history writing, now looking to uncover complex roles animals played in historical narratives. Research is drawing attention to the fact that animals were very much part of the collective past, and were remembered and memorialised in ways that shaped human views and thinking. The story of Jumbo the elephant is a great example of this, revealing a history of human-animal relations and the various influences Jumbo had on human historical experiences.

Born around 1860, Jumbo was the first African elephant to set foot in England. Like a lot of zoo animals, he was captured at a very young age by a party of hunters who had separated him from the herd. After initially spending some time in Paris zoo, he was bought on exchange by the London Zoological Gardens (now known as London Zoo) and shipped to England on 26th June 1865. He was an instant hit and, after an initial struggle, Jumbo learnt to obey the voice and commands of his keeper Mathew Scott. Under Scott’s constant care and love, Jumbo soon became ‘very frolicsome’, and would kick at the woodwork pieces of his den, and occasionally wind up neighbouring animals. For example on one occasion, he angered the male hippopotamus, Obaysch, by throwing up dust into his eyes. The infuriated hippo then charged at the bars causing further injury to his nose, thus enraging him all the more.

As Jumbo grew up, he soon found it was part of his job to give children rides around the zoo. Ticketed rides came in the form of tips and went straight into the keeper’s pocket. So Jumbo was a gold mine, earning Scott an annual bonus of more than £600 (around £72,000 today). Children would feed him buns and apples sold in the zoo, while Jumbo would occasionally munch on the flower in ladies’ hats if they stood too close. This was slightly better than the ostrich who ate anything from pennies to fob watches! Nonetheless, Jumbo kept on growing. In fact, by 1880 he was 3.32m tall and was beginning to be a rather large problem.

Many zoologists knew that male elephants, however docile as teenagers, often become very volatile as they reached maturity, succumbing to a periodic condition called musth. Over the Easter weekend in 1879, a small Indian elephant killed a keeper after showing signs of this condition. It did not take long for the superintendent, Abraham Bartlett, to realise the potential problem Jumbo could cause. Bartlett literally had to address the elephant in the room.

Therefore, the zoo’s council took swift action and wrote to Phineas Barnum, an American circus proprietor, offering Jumbo for £2000. Knowing the difficulties of boxing Jumbo, Bartlett added the condition ‘as he stood’. Barnum later accepted the offer by telegram and sent a group of able bodied men to London. 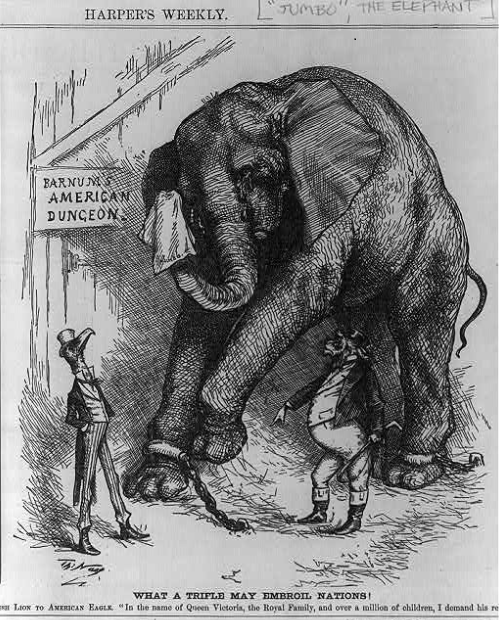 What a trifle may embroil nations! British lion to American eagle, ‘In the name of Queen Victoria, the royal family, and over a million of children, I demand his release’. Harper’s Weekly.

This caused a massive outrage amongst the public and Fellows of the Zoological Society. Disgruntled letters were sent to the zoo’s Secretary, Philip Sclater, describing Barnum as an ‘impecunious tradesman’. One fellow even went as far to suggest the sale was illegal. Events became even more pitiful when Jumbo refused to enter the travel crate that was specially designed for him, nor would he leave his darling elephant “wife”, Alice, whom the public sentimentally married-off to Jumbo. According to reports, Alice was delighted when Jumbo returned to his paddock, clumsily springing around her compartment. Eventually, however, on 24 March 1882, Jumbo was taken down to St Katherine’s dockyard and hoisted onto a steam ship.

Then, ‘as the trumpetings of the noble emigrant blended with the chugging of the engines’, the great British scandal came to an end. Jumbo had packed up his trunk and said ‘hello’ to the circus. He then spent the next three years touring America, making $1.5 million for Barnum. But this was not to last.

When crossing a railway line at St Thomas in Ontario, Canada, Jumbo was hit by an unscheduled freight train. A story later emerged that he was taking a young elephant off the tracks in order to save him, but was too slow to save himself. Engaged in this trial of strength, he was killed almost immediately. Jumbo’s body was later stuffed and sent to Tufts University in Massachusetts, where he become the university’s mascot. Sadly, Jumbo-mania came to a fiery end in 1975 when Barnum Hall and the beloved elephant were consumed in an electrical fire. 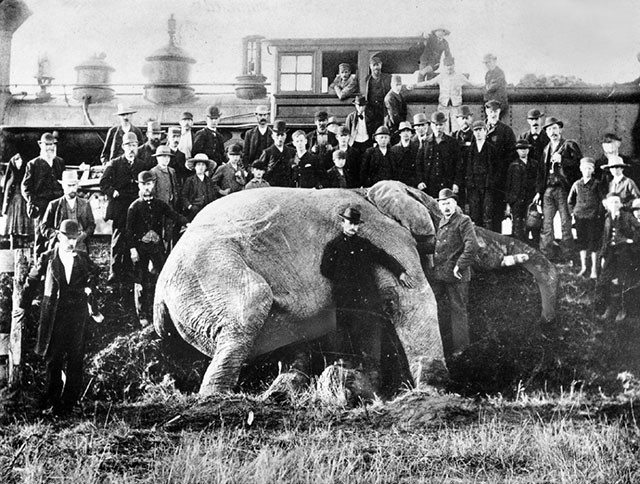 Jumbo’s body after the collision. The engine driver was killed and two coaches were derailed. His keeper, Mathew Scott is standing nearest his head.

But Jumbo’s story lives on. His ashes were recovered in a peanut butter jar and now act as a good luck object for students to touch before exams.

This short history of Jumbo highlights some of the ways in which animal historians deal with animal-human narratives. Jumbo’s story shows that animal history is not only possible but can be incredibly detailed, even continuing to have a history after an animal’s death. People (and indeed other animals like Alice) interacted with Jumbo in numerous ways, creating a variety of emotional and individual responses. Therefore, incorporating animal histories into wider historical discussions can offer new and interesting perspectives of the past. Every period of history has some interaction with animals, whether it be for food, transport, study, or simply something to gaze at. Like social history then, which sought to recover a history of the masses, animal studies intends to bridge that gap between us and the rest of the animal kingdom.

For more on Jumbo see David Attenborough’s documentary ‘Attenborough and the Giant Elephant’.