We are pleased to introduce the latest post in the Postgraduate and Early Career Takeover, by Daniel Gettings. Daniel is a doctoral researcher at the University of Warwick whose work focuses on the relationship between water, religion and everyday life in early modern England.

There is perhaps no witchcraft practice more famous today and portrayed better in popular media than that of ‘ducking’ a witch. Appearing in TV shows as diverse as Doctor Who, Criminal Minds and The Simpsons, the strength of this idea in popular consciousness seems to stem from how perfectly it’s bizarre logic chimes with modern feelings towards belief in witches. Sinking implied innocence and floating denoted guilt. While this appears ridiculous, so does the entire concept of witchcraft to the modern mind and so the strong association between the two makes a strange sort of sense.

However, the logic that upheld this belief in the seventeenth century was clearly convincing to figures of that time, most notably James I of England and VI of Scotland, and reveals a far more complex association between water and witches with much darker implications than modern understandings would suggest.

Today’s view of ‘witch ducking’ is effectively a conflation of two early modern practices; the ‘swimming test’ for witches and the use of the ducking stool. As David Underdown has explained, the ducking or ‘cucking’ stool was an official method of punishment which, by the early modern period, was reserved for women accused of crimes like scolding their husbands in public. It was used to humiliate; not to unearth witchcraft. By contrast, James Sharpe has shown that the ‘swimming test’ utilised no specific equipment, was almost always conducted unofficially, and involved simply throwing a bound victim into a body of water to see if they sank or floated. It should also be noted that, contrary to modern myth, those who sank and were therefore innocent usually did not drown. There were occasionally accidents, but those tested in this manner had a rope attached to them, allowing them to be pulled out of the water again and preventing most drownings.

In an anonymous 1613 pamphlet, the method for this test was laid out to English audiences. The victim was to be bound and thrown into the water. If they floated, they were to be examined for ‘any extraordinarie markes about’ the victim’s body. If any were found, they were to be tested again, but this time bound by ‘her right thumb to her left toe’ and vice versa. If they floated a second time the pamphlet ensured readers ‘you may build upon that she is a witch’.[1]

While this pamphlet is usually cited by historians of witchcraft as the first time this practice appears in England, it had been in use in continental Europe earlier in the sixteenth century. It was likely through continental literature in languages other than English that King James first encountered the concept, writing about it in Daemonologie which was first published in 1597, 16 years before the pamphlet. In 1603, James became King of England and Daemonologie received a reprint in London, exposing a new audience to its ideas which now came with the stamp of royal approval. 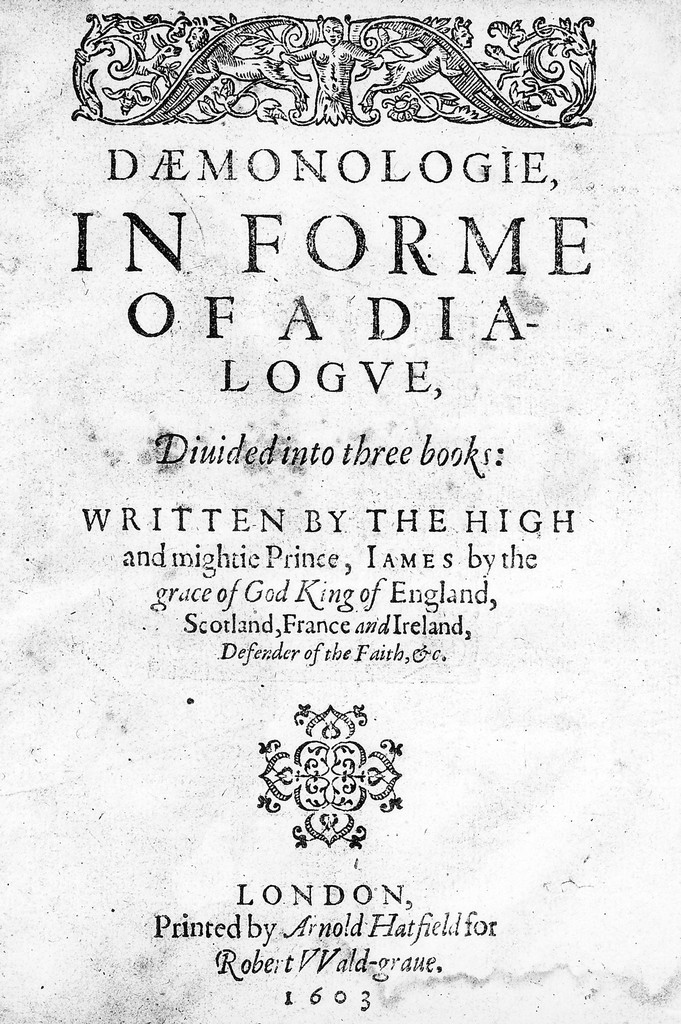 Title Page, Daemonologie, in forme of a dialogue…, King James I and VI, 1603. Wellcome Collection. Attribution 4.0 International (CC BY 4.0).

Where the 1613 pamphlet merely described the method of conducting the swimming test, James’ Daemonologie elaborated on why he believed this method of detecting witches was so effective:

‘God hath appoynted (for a super-naturall signe of the monstruous impietie of the Witches) that the water shal refuse to receive them in her bosom, that have shaken off them the sacred Water of Baptisme, and wilfullie refused the benefit thereof.’[2]

Thus witches floated because their pact with the devil constituted a rejection of their baptismal vows, and so all water rejected them in turn. This justification for the test was very similar to that used in continental literature and stemmed from medieval Catholic sacramental beliefs around the power and purity of water as an element. It would have been unacceptable to many in the Protestant churches of England and Scotland if James had repeated the traditional justification wholesale, and so we see that he makes it clear that ‘God hath appoynted’ this ‘signe’. Turning to divine providence and hailing the test as a signal from God rather than as some quasi-magical elemental reaction had two effects. It made it inherently acceptable to Protestant sensibilities while also locating it within early modern understandings of water as a tool of God’s will, a concept with which the public were very familiar, both from scripture, and from popular print about storms and flooding. While the swimming test was never officially adopted into the English legal system, James’ work ensured that it maintained a long legacy in extra-judicial trials and popular understandings of witches for centuries to come.

In a final dark twist, James did not use this relationship between water and witchcraft to merely justify the swimming test. He wrote: ‘No not so much as their eyes are able to shed teares (thretten and torture them as ye please)’ and went on to explain that, in the case of female witches specifically, their tears were ‘like the Crocodiles.’ This cold rationalization for the merciless torture of women has been overlooked by some historians investigating this passage in Daemonologie due to their primary interest in the swimming test. Its terrible significance, however, is demonstrated by the influence it had on Matthew Hopkins, the self-styled ‘Witchfinder General’. Hopkins oversaw three years of witch hunts in East Anglia from 1644 to 1647, the most intense of any area in England. Upon retiring in 1647, he wrote a book, The discovery of vvitches, in which he laid out his beliefs and practices. There he specifically references the passage on water and baptism in Daemononlogie, and later noted that due to the ‘nature of the elements’, accused witches cannot cry.[3]

These beliefs around water and witchcraft had a real-world impact in England and Scotland and further supported the torture without mercy of numerous victims. James’ recontextualization and dissemination of medieval beliefs in an ‘acceptable’ manner as well as the inherent justification his name provided contributed significantly to the longevity of these practices in England and Scotland. Regardless of their status within the English legal system, these are hugely significant in the study of English witchcraft, popular belief, and water more broadly.

[1] Anonymous, VVitches apprehended, examined and executed, for notable villanies by them committed both by land and water With a strange and most true trial how to know whether a woman be a witch or not (London: William Stansby, 1613).

[3] Matthew Hopkins, The discovery of vvitches: in answer to several queries, lately delivered to the judges of the assize county of Norfolk. (London: 1647) p. 6.