Earlier this year while writing my undergraduate dissertation about how eighteenth-century London polite society treated the physically disabled, the most common reaction from friends, family and fellow students was ‘oh, it must have been really terrible for disabled people back then’.

I understood what people were getting at, partly because my view had been similar before starting the research, and it is certainly hard to disagree that life back then was much more difficult than it is now.  But the early modern period was tough whoever you were, and I doubt many people today would willingly swap their life now for that of anyone, rich or poor, disabled or not, back then.

During these conversations I always asked that people suspend most of what they thought they knew and consider a couple of things unearthed during my research, things that might help them towards a view that was more nuanced than ‘life was terrible’.  One was the different use of language; the terms ‘disabled’ and ‘able-bodied’ were in use but did not divide people into categories based on their ability to participate equally in society.  Early modern society did not see a distinct group of ‘disabled’, and the sources reveal a great degree of community acceptance, support and simply living alongside those with physical impairment or mental illness.

Another thing to consider was the evidence I found of agency amongst the disabled, even the poor – a sense of control of their lives, a capacity to influence thoughts and behaviour and confidence to make significant life decisions.  The understandable modern reaction is to believe that living with poverty and disability in the eighteenth century meant few, if any, opportunities – a restriction on a ‘normal’ life, and a desperate, immutable, fate.  But there is evidence to the contrary; in the sources we see people choosing work, self-fashioning, and shaping a future to create a productive and fulfilling life.  It was also common for disabled people to marry, often to non-disabled people, and have children.

There are some good examples: Jeffrey Dunstan, a deformed wig-selling street vendor, propelled to the position of London celebrity after being elected ‘mayor’ of Garratt in a mock ceremony in the 1780s; such a celebrity that he now has his own entry in the Oxford Dictionary of National Biography, the national record of those who have shaped British history and culture.  Dunstan was a sharp-witted raconteur who, at the height of his fame as ‘mayor’, delivered eloquent and politically-astute speeches to tens of thousands of people.[1]  Or Matthias Buchinger, born without hands or feet, who married four times, fathered eleven children, and was well-known for his remarkable artistic and musical abilities.  And Thomas Inglefield, also born without limbs, another talented artist who sold work from his shop in Tottenham Court Road.[2]  Of course life was hard, and these people needed a degree of patronage as well as their talent and drive to make their lives more comfortable, but the point is that they were not stripped of their selfhood just because of their disabilities – they were all able to take some control and direction of their lives. 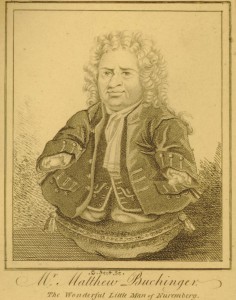 It often became clear that my interlocuters did not necessarily mean that life was ‘terrible’ for the eighteenth-century disabled, more they believed that as time moved on things always got better; that medical advances, social attitudes, laws, and rights that support the disabled at work and in the community, all progressively improved until we got to where we are in the present day – in so many ways a preferable era in which to live.  Of course much of that is true, except that history doesn’t work in a nice straight positive trajectory of progress.

There is one glaring exception to the belief that things got progressively better between the eighteenth century and now; the period that includes most of the nineteenth century and the first half of the twentieth.  During this time there was a deliberate move towards institutionalising those who didn’t fit into society, often those with mental illness.  Legislation like the 1808 County Asylum Act and the 1834 Poor Law Amendment Act helped establish a principle that the state had a duty to identify, treat and control those who were different.  There was a move to institutional ‘indoor’ instead of ‘outdoor’ relief for those who may formerly have been supported to live in their own communities.

The period was marked by harshening social and political attitudes towards those who were considered unable or unwilling to contribute to society and this led to many decades of industrial-scale institutional abuse and harsh treatment of some of the most vulnerable members of society.[3]  If there is any place for use of the word ‘terrible’ in relation to treatment of the disabled, it is better directed at this period than the eighteenth century.

Disability in the early modern period is an under-researched area and much more needs to be written about the subject.  Its study matters because reconstructing the histories of individuals brings to life some interesting people who contributed so much to their communities; it humanises the long-forgotten.  This is not only interesting but also useful in the wider study of history: the stories of such marginalised people tell us a lot about the society they lived in, and not just from the point of view of the disabled; they allow an insight into the wider mentality of the period.

I am hoping there will be a time when I mention the subject and someone says ‘disability, now THAT is interesting!’, with an ensuing conversation about how the lives of the disabled poor may well have been harsh and harrowing, but that they could also be rich and fulfilling, and were always so much more than just ‘terrible’.

[3] Simon Jarret, Those They Called Idiots: The idea of the disabled mind from 1700 to the present day (Reaktion Books Ltd, 2020).