This post is part of the Monster Carnival 2022 – Why Early Modern History Matters Now. Onni Gust is Associate Professor of History at the University of Nottingham. Their research focuses on ideas of sex and the human-animal boundary in eighteenth-century British imperial thought.

Towards the end of the summer, Disney launched a trailer for its new version of The Little Mermaid, starring Halle Bailey as Ariel. The launch generated much excitement on social media. Parents of young Black girls posted videos of their daughters’ faces lighting up when they saw a heroine that looked similar to themselves. And then came the inevitable pile-on by racists. According to some commentators, the casting of a young, Black actress as Ariel was a distortion of the original, ‘authentic’ and necessarily white Ariel. To turn Ariel into a Black mer-girl was yet another egregious example of ‘wokeness’. 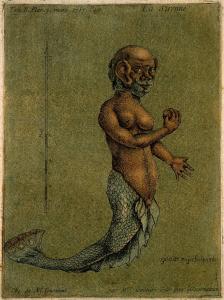 Hans Christian Anderson wrote The Little Mermaid in 1836 and the best-known adaptation is Disney’s 1989 film. In both versions Ariel is portrayed as having white skin – ‘delicately fair’ – with long flowing hair and blue eyes. There is nothing politically neutral about this physical description. These images are deeply embedded in racialised concepts of beauty and femininity that were being developed in the long eighteenth century in the context of European colonial expansion. A brief look at the history of mermaid sightings, capture and display during this period offers some insights into this history of racism and anti-blackness that resurfaces continuously in our own times.

Mermaids have a long and enduring presence across the globe in literature, myth and spiritual beliefs. As Celeste Headlee and Kalyani Saxena write, Black mermaids, notably the gender-fluid Mami Wata, have an important presence in African folklore; aquatic goddesses and spirits also exist in various forms in myths and legends across Asia; in Europe mermaids and sirens were regular features of sea-faring stories and ancient myth. In eighteenth-century Europe, however, a renewed fascination with merfolk formed part of a wider interest in the limits and possibilities of the natural world.

Rumours of mermaids usually began with sightings by fishermen, sailors, or coastal dwellers from Caithness to Cornwall, to the Gulph of Stanchio in the Aegean Sea and the Aquapulco [Acapulco] shore on the Pacific Ocean. Narratives of sightings reached the Anglophone colonial press and were circulated in newspapers, including the Gentleman’s Magazine.[1] Occasionally, mermaids were killed or captured and displayed alongside other ‘curiosities’ such as giants, dwarves, Africans, conjoined twins, and people with intersex characteristics who were exhibited as ‘hermaphrodites’.[2]

Eighteenth-century freak shows straddled the boundary of ‘elite’ and ‘popular’, drawing the interest of natural historians, physicians, and philosophers. As Vaughn Scribner has argued, although Enlightenment thinkers were sceptical about the existence of mermaids, they nonetheless took seriously the possibility of human-like sea creatures and their potential for understanding the natural world and human evolution.[3] In the 1760s, for example, Linnaeus received the skin of a mermaid-like creature from Dr Garden in North Carolina. Based on that specimen and other descriptions of human-like fish from across the European colonial world, he named it Siren lacertina.[4] The most famous case of mermaid display, the Feejee mermaid, was the talk of naturalists across the British Empire when it was displayed in 1822; it turned out to be an elaborate hoax comprised of animal parts stitched together.[5]

It is no surprise that as the number of Europeans sailing across the seas in search of trade, wealth and plunder increased, so too did mermaid sightings. However, it wasn’t just greater exposure to a wider range of seas that explains the growth of interest in merfolk. These sightings need to be placed in the wider context of colonial classification and racism. A closer look at reports of mermaid sightings and exhibitions reveals the consolidation of racial hierarchies and prejudices against blackness, prejudices that intersect with ideas of femininity and beauty. 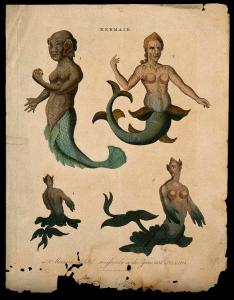 The majority of reports of mermaids tended to be descriptive, detailing eye colour (often grey-green), hair colour (usually dark green), and the shape of the hands/fins. However, two of the most famous mermaid specimens became the subject of racial comparison. The first was displayed in St Germain in 1758 and was described by Gautier, who painted the mermaid, as ‘hideously ugly’.[6] Part of that ‘ugliness’ was due to the ambivalent sex of the St Germain mermaid, which had breasts but whose bald head and prominent facial features went against the ‘delicacy’ attributed to white femininity. As far as I know, however, there were no explicitly racialised comments on the St Germain mermaid until 1774, when another mermaid sighting in the Aegean Sea offered an entirely different vision. According to the report that circulated about this mermaid, ‘she has the features and complexion of a European. The face is like that of a young female, its eyes of a fine light-blue, its nose small and handsome’.[7] Making an explicit contrast between this mermaid and the St Germain mermaid, the writer of the report referred to the latter as having ‘the countenance of a Negro’. The engraving by J. Pass built on this description, showing these two mermaids with clearly racialised features and in opposition to each other.

The same aesthetic judgments and assumptions of white superiority that are embedded in Enlightenment classifications of humans are apparent in this comparison between the 1758 and 1774 mermaid exhibits. Those prejudices are evident in Hans Christian Anderson’s famous story, in which ‘fair’ skin, flowing hair and a blush signifies beauty and virtue.[8] Disney’s 1989 portrayal of Ariel as white, slender and feminine (and Ursula as a fat, high-femme, dark-skinned, deceptive sorceress) continues these racially-coded messages that come straight out of eighteenth- and nineteenth-century European imperial racism. It is not surprising, then, that the undoing of some of those harmful stereotypes by the casting of Halle Bailey as Ariel has upset racists and inspired young, Black girls who have for far too long lacked positive representation.

There is so much more to say about a story of impossible longings for a different, altered state, a story that has its own, queer subtext and has been claimed by marginalized people for decades. As powerful symbols of alternative, hybrid forms of existence, mermaids evoke our desires for transformation and acceptance.[9] Will Disney’s new adaptation reflect those desires? Is the new, Black Ariel a sign of the undoing of racist beauty norms? What about the other, intersecting, toxic remnants of European imperial expansion and white supremacist patriarchy – the demonisation of gender variance and queer sexualities? I guess we’ll have to wait and see. Keep your fingers and fins crossed.

[1] Many of these newspapers and handbills are collected in Daniel Lysons, Collectanea: or, A Collection of Advertisements and Paragraphs from the Newspapers, relating to Various Subjects: Publick exhibitions and places of amusement Collection Item [1661-1840].

[4] Letter from Carl von Linneaus to John Ellis in J.E. Smith, A Selection of the Correspondence of Linnaues and other naturalists (London 1766), p.191.

[5] Jan Bondeson, The Feejee Mermaid and Other Essays in Natural and Unnatural History (Ithaca, NY, 1999).

[9] See this beautiful poem, Beyond Old, and into Myth, by Remi Graves that evokes Mami Wata.