Every year, universities across Britain and beyond place hundreds of advertisements on jobs.ac.uk seeking to appoint historians to academic posts. Although accessing this data is not easy and analysing is far from straightforward, recent listings do provide some potentially useful information about the state of the academic job market for historians.

In my previous posts on jobs, I have focused primarily on the ‘supply side’ of the equation – how many people are completing PhDs each year and how that is changing. It is much more difficult to get hard data on the ‘demand side’ – i.e. jobs available – though I’ve tried various proxies such as the numbers of historians with university posts or the number of incoming history undergraduates. The cohort studies of Warwick and Cambridge PhDs allowed me to link doctorates to academic posts more directly, but that was only a small and probably unrepresentative sample.

The advertisements on jobs.ac.uk allow us to get a better sense of how many jobs are actually listed in a given year. Unfortunately, these listings and their urls disappear as soon as the advert expires, making it very difficult to collect details over an extended period. However, John Morgan – currently Economic History Society Power Fellow at the Institute of Historical Research – has an RSS feed of these jobs going back to May 2013. He very kindly scraped the infomation and put it into an excel file, which he shared with me. This is the raw file. As John notes:

the data don’t cover your whole period, and not all of the interesting information is preserved (the way my reader handles xml seems to have changed over time, meaning quite a lot of salary data is missing). I also have no way of knowing whether my reader missed any adverts in the past – I assume it hasn’t, but can’t know this. But there are 2,677 ads listed here. They still need sorting in the way you mention in your post – it’s a mishmash of PhD positions, postdocs, hourly paid jobs, etc. – but it might be of interest to go through at some point.

I’ve gone through the raw data and done some simple trimming and sorting. I removed all the listings that I could find that were pre-PhD posts, such as MA and PhD studentships. Although I may have missed a couple, I believe essentially all of the remaining listings are post-PhD posts. I then attempted to figure out which ones were temporary or fixed-term posts. This is more difficult and necessarily incomplete as many job listings do not include this information in their titles, which is all I have access to. Thus, some of the unspecified ‘lectureships’ that are here counted as possible ‘permanent’ posts are actually temporary. So, in what follows the figures for ‘permanent’ posts should be taken as maximums and those for ‘temporary’ are minimums.

I also attempted to sort the posts into academic years (September to August), so as to make them comparable to my other figures discussed in earlier posts. This means that there is data from four academic years, but that the first (2012-13) and last (2015-16) are only partial. This is the cleaned and sorted file.

Another problem is the incompleteness of the data. I believe that the vast majority of UK academic posts are advertised on jobs.ac.uk, but there are sure to be a few that are not. 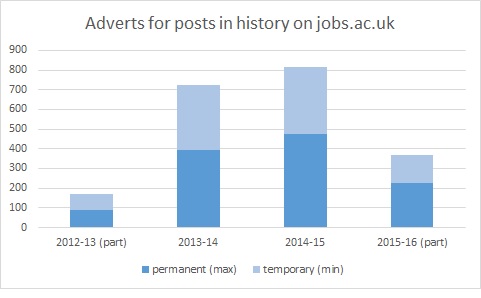 So, in those two years there were an average of 769 posts advertised per annum. This seems like an encouragingly large number at first glance. However, the implications for the academic job market are actually rather worrisome for recent PhDs seeking permanent academic posts, because this dramatically overstates the number of positions available.

The second problem is ‘churn’, that is to say people moving from one permanent post to another. For example, if a Chair in Medieval History is advertised, that post is likely to be filled by someone who already has a permanent post, whose previous position will then (usually) be replaced, thus leading to another advert. In such situations, jobs.ac.uk will list two adverts, but there will really only be one new job. In the spreadsheet, I found 34 ‘chairs’ and 19 ‘readers’ advertised, almost all of which will be filled by someone with an existing permanent post. There were also a couple hundred other ‘professor’ posts advertised, though many of those were ‘assistant’ or ‘associate’. My guess would be that at least fifty posts per year are filled through ‘churn’ and thus these posts don’t really ‘count’ towards the total jobs actually available. That reduces the number to perhaps 300-350 permanent jobs available each year.

The final problem is the large number of PhDs completed each year. In these two years, there were on average 652 doctorates in history granted per annum. Even with the very generous estimates above, that means that there is only about one permanent job for every two new PhDs. Personally, I suspect that the adjustments I’ve made are likely to be substantially too optimistic and the real figure is closer to one job per three PhDs, but closer analysis would be needed to prove this. 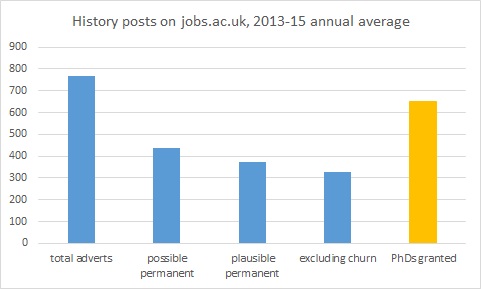 For now, I will simply say that the data from jobs.ac.uk suggest that there are many job opportunities available for new historians, but that the prospects for a permanent career in this field are much more restricted. There must be a subtantial gap between the number of people who are able to find temporary posts after finishing a PhD and those able to secure long-term academic employment.

I am extremely grateful to John Morgan for providing the raw data for the post above. If anyone has an RSS subscription to ‘history’ posts on jobs.ac.uk that goes back earlier than May 2012, please let me know.

Also, just to get a sense of the seasonality of adverts, I did a quick chart based on my own weekly data for 2015-16. This data is very messy – e.g. it includes studentships – but it at least provides a basic overview of the year to date. 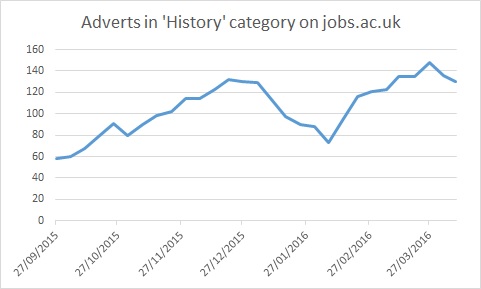 Finally, as I have said in a previous posts, we must also remember that many people do PhDs without the intention of going into an academic career. We should not simply assume that academic jobs for new PhDs are a ‘Good Thing’. We should not neglect the contributions of people with historical training to non-academic fields (e.g. ‘alt-ac’ jobs) and the value of doctoral study to people from all walks of life, irrespective of their career goals. In fact, I hope that this post will push people to think harder about the problem with equating PhDs with academic careers.

Andy Burn (Durham) used the spreadsheet to do a bit more analysis and came up with very useful information.

First, he worked out a much more accurate and detailed pattern of the seasonality of history listings on jobs.ac.uk. He found that ‘permanent’ jobs tended to be advertised in the spring (mostly February to May) and ‘temporary’ posts were usually advertised later (May to July). There are exceptions, but useful to know if you are planning and preparing job applications. 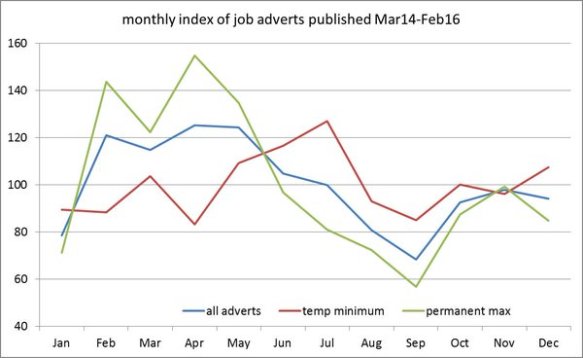 This information about seasonality is also useful as it allowed Andy to project forward from our current 2015-16 data (which only goes to February 2016) to estimate the total listings for the whole year. According to his projection, there will be 856 adverts in 2015-16, of which a maximum of 571 will be permanent. This is an increase of 5.2% and 20.3% respectively. That certainly seems like good news, though we don’t have the figures for new PhDs for this academic year, so we don’t yet know if the number of people competing for these jobs increased too. 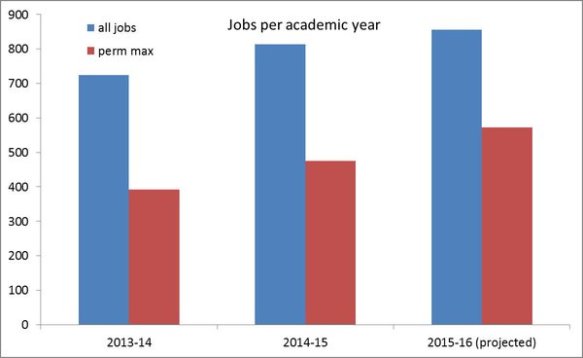