To celebrate the launch of Understanding Early Modern Primary Sources the monster-heads have each written a brief post offering a personal perspective on the source type that they most like working with (the introductory post is here). Do tell us your own below the line, or on twitter #histsources

My favourite early modern primary source? When you have spent the last year working almost exclusively with one type of source you come to either love it or loathe it. In the case of the court depositions I have been reading extensively for the Women’s Work Project I’m glad to say it’s the former. They undoubtedly top my list. 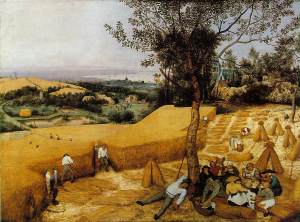 For a historian driven above all by a desire to recover the everyday lives of ordinary women and men in the past the witness statements they gave in their tens of thousands before the courts of the sixteenth and seventeenth centuries represent a rich seam indeed. In recounting the details surrounding cases in criminal, civil and ecclesiastical courts, deponents provide accounts of myriad aspects of day-to-day experience. They tell us about their working lives of course – about mowing corn, spinning yarn or shearing sheep at the time of witnessing a crime, say – but also how they spent their leisure time – about trips to the alehouse describing who they drank with, how much they drank, and who subsequently fell out with who.

They can reveal the topics of conversation that filled the churchyard as people milled around after morning prayer on a Sunday, and the shirts, shoes and pans that people owned and valued (and had stolen). The way people conceived of time is captured – events are described as occurring ‘after candle lighting’ or ‘at harvest time last past’ – and how they labelled space – the names of fields, roads and alehouses are routinely given. They can recount touching tales of courtship practices and proffer insights into the often bizarre lexicon of early modern insults (I’m still trying to work out the significance of the insult ‘burnt-tailed whore’). Immerse yourselves in depositions and the texture of everyday life can start to feel almost tangible.

Careful now. Depositions are not, of course, simply ‘factual’ accounts of everyday life (and they would arguably be much less interesting if they were). Take the case of Joan Mundyn of Cornwood, Devon, who was involved in a testamentary dispute in 1674. I’m going to write this up in more detail for the Women’s Work Project blog at some point, but for now a brief summary will suffice. Other witnesses were asked to comment on the trustworthiness of Joan’s testimony, including being asked what she did for a living. All agreed that she sold bread and beer – something we might therefore consider a fact. But one group of witnesses situated this work within a broader character assessment of Mundyn as an unscrupulous ‘alehouse-keeper’, one who was ‘griping and over-reaching in her reckonings for bread and beer’, who encouraged young male apprentices to drink away their master’s credit, who had beaten her husband into moving out, and whose maid servants had all ended up bearing illegitimate children. 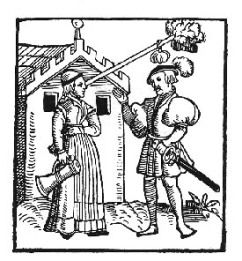 Another group of witnesses had a different story to tell. Joan Mundyn was ‘a baker by trade’, and a famously philanthropic one at that: at the time of a recent dearth she had bought up large quantities of corn which she baked into bread and gave to the poor on trust, with little hope or expectation of ever being paid for it. Her estranged husband? A respectable turner who did not live separately because of a marital breakdown, but was simply away for long stretches at a time working in the houses of gentlemen. Both Mundyn and her husband were parishioners of honest reputation and standing.

So, we can be fairly certain that Joan Mundyn sold bread and beer (the kind of evidence of work activities I am looking for in my current research) but the depositions surrounding this case have very different stories to tell about other aspects of her life and conduct, and about her character and place within the community. The instinct of historians here might be to worry about who was telling the truth, and who was telling tales. But what if we run with the idea that everyone was telling tales? Or, at least, telling stories. Indeed, the best way to understand depositions such as these may be to see them as stories – something which is made-up, not out of thin air, but out of a combination of events and the significance that contemporaries attached to them.

We also need to acknowledge that these stories were collective and complex compositions. As Fran Dolan has recently reminded us[1], depositions as written down were not the unmediated words of the deponent, but rather a composite effort between deponent and court clerk. This in turn was shaped by a series of questions and answers that were themselves informed by legal structures and formulas that dictated what details did and did not matter in a case, and by broader cultural tropes about what was believable, credible and respectable. In other words, these were stories that were shaped by, and therefore reflect, a wider web of social relations and cultural values that tells us more about early modern everyday life than simply ‘what happened’. 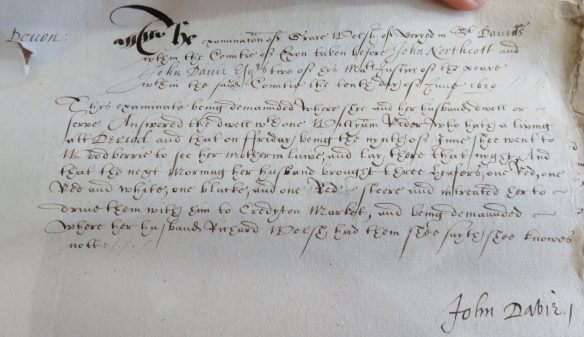 If we think along these lines the ‘story’ element of depositions is not a fundamental problem for the historian, but integral to their value, and ripe for analysis. For everyday life, past or present, is not a series of neutral ‘factual’ activities, stripped of meaning by their quotidian nature. It is, rather, a series of activities that are imbued with meaning and resonance by individuals and the wider culture in which they take place – that is to say, by the stories we tell about them. What is fascinating for the historian of everyday life is not just what people did, but also how they thought about it, and what it meant. Depositions offer us access to some of the stories that contemporaries constructed about everyday life, and for that reason I can’t get enough of them.