To celebrate the launch of Understanding Early Modern Primary Sources the monster-heads have each written a brief post offering a personal perspective on the source type that they most like working with (the introductory post is here). Do tell us your own below the line, or on twitter #histsources

I have a confession to make: I love churchwardens’ accounts, and in this post I want to try 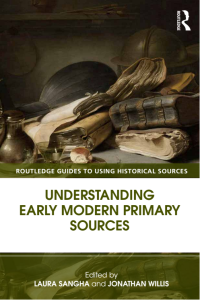 to convince you that they have something to offer pretty much everybody interested in researching, reading or writing about early modern England.  As well as co-editing Understanding Early Modern Primary Sources with Laura, I contributed a chapter on ‘Ecclesiastical Sources’, and one of the nice things about editing or co-editing a volume like this is being able to choose exactly what you want to write about!  I happen to be, of course, a reformation historian, and so sources relating to or generated by the Church are naturally something I’m going to be interested in.  But in that chapter, and in this post, it is my intention to show that ecclesiastical sources in general (and churchwardens’ accounts in particular) are of enormous interest and value, almost no matter what area of history you are interested in.  Politics?  Economics?  Society?  Culture?  They’ve got it all! 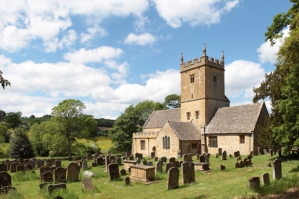 First, the basics.  Churchwardens were the elected (and unpaid) representatives of the parish community, charged with collecting and administering parish funds for their term of office, usually two years.  Often churchwardens served in pairs, and their terms overlapped, delivering a level of continuity as there was always somebody in the job with at least a year’s experience.  Beat Kümin has described the evolution of the office of churchwarden, initially created as a response to the parish’s obligation to maintain the nave of their parish church (the upkeep of the chancel was technically the responsibility of the minister).[1]  The necessity of being responsible for collecting and spending a communal pot of money naturally meant the keeping of detailed accounts of funds coming in and payments going out.  The churchwardens’ account was born.

In essence, then, churchwardens’ accounts are just that: lists of figures and brief 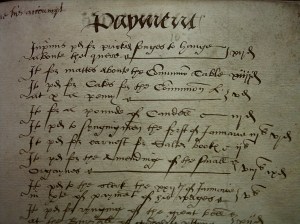 descriptions of how that money was raised, or what it was being spent on.  If you are going to work on churchwardens’ accounts, brush up on your roman numerals (remember that ‘j’ was commonly used in place of ‘i’ at the end of a number, so 8 was written viij), and remind yourself of the mechanics of pounds, shillings and pence, or li, s and d from the Latin libri, solidi and denari (12d = 1s; 20s = 1li).  This financial/numerical element therefore means that churchwardens’ accounts lend themselves quite nicely to the sort of quantitative analysis described by Brodie in his post.  I have even been known, on occasion, to fire up the old Excel spreadsheet and generate a few graphs of my own, such as this one depicting the average annual income of a sample of London parishes: 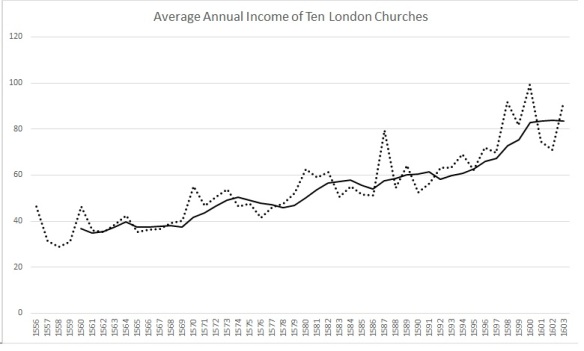 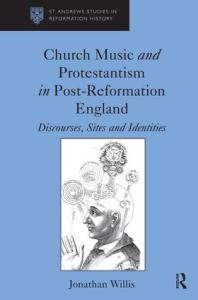 It was my doctoral research on music and the English reformation which first drew me to the testimony of the churchwardens’ accounts.[2]  I wanted to try to formulate a national picture of post-reformation religio-musical activity: what was the fate of organs and parish musicians; and how were practices such as intricate choral polyphony and simpler congregational psalmody resourced over the latter part of the sixteenth century?  Churchwardens’ accounts held the answer, or at least part of it.  They told me when an organ had been bought, or sold, or repaired; how extensively, and for how much.  They told me when an organist, or a singingman, or a boy chorister, had been hired for a day or a month or a year.  They spilled the beans on the writing out (or ‘pricking’) of polyphonic music, and also on the purchase of ‘Genevan’ metrical psalters.  One of the beauties of churchwardens’ accounts is that, taken individually, they give a unique insight into the life of a single parish; but they also lend themselves incredibly well to being considered en masse, enabling the analysis of trends and patterns at a local, regional or even national level.  The other great boon they offer is a portrait of change over time, perfect for reformation historians interested in charting the initial impact and subsequent shockwaves of religious change, but also for anybody interested in changing behaviours or relationships over time between people, places and things (and what else is history, when you get right down to it?).

OK, there are problems with churchwardens’ accounts; methodological difficulties, as with 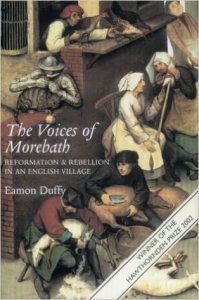 any primary source.  Firstly many no longer survive, and so geographical and chronological coverage is in reality quite patchy.[3]  Secondly, some record-keepers were more diligent – and some more slapdash – than others.  The rich and fulsome accounts of Morebath famously enabled Eamon Duffy to write a whole book about the eponymous rural Devonshire parish, complete with personal annotations and reflections by the priest Christopher Trychay and a smoking gun regarding the arming of volunteers to fight in the 1549 Western Rebellion.[4]  Other sets are much more sparse, and do not even contain records of expenditures which we know must have taken place, such as for communion bread and wine.  This patchiness in terms of detail means that we have to be careful in building up regional or national pictures, because we are not necessarily comparing (or combining) like with like.  Often parishes administered several different funds, particularly before the reformation, and so what we get from the churchwardens accounts, if you like, is a minimum level of activity, rather than a complete portrait of parish life.[5] 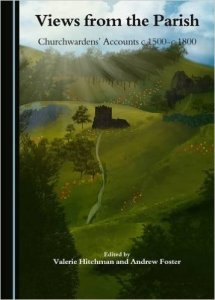 And yet…  In the interests of accessibility, let’s take an online example; the accounts for 1547-8 of the wardens of the parish church of St Mary at Hill in the City of London, first published by the Early English Text Society and latterly digitised by British History Online.  This was a significant year, the first year of the reign of Edward VI, and the moment at which the religious revolution of the reformation kicked into high gear and began to really transform parochial religious life.  The account contains payments to a series of ‘conductes’ (musicians), including for a quarter year to Phillipp (55s) and William (6s 8d) Ryse, both organists.  This was anything but business as usual, however, for towards the end of the year 20d was payed ‘for Removing of thorganes’.  The Rood loft and tabernacle were also removed, but payments were made for six English psalters, ‘iiij songe bokes of the deum in Englisshe’, ‘a boke called the paraphrases of Erasmus’ and also ‘for paynting of the Rode lofte with scriptures’.  As I wrote recently in a brilliant volume on churchwardens’ accounts, edited by Valerie Hitchman and Andrew Foster, such entries only tell us what was done: they don’t tell us how people felt about the changes that were taking place.[6]  Was the removal of the Rood loft at St Mary at Hill an act of fervent, triumphant evangelical iconoclasm, or conducted amidst much weeping and wailing, and regret for a past way of life which had been irrevocably shattered?  Other sources – court records, personal documents, wills – are required to drill downwards and interrogate what was going on beneath the level of parochial institutions.  But for a quick, dirty and fascinating glimpse of parish life at a particular moment in time you can’t do much better than the churchwardens’ accounts.

I promised you more than religion though.  What other single source will tell you yes about music and religion, but also about church interiors, about painting, about craftsmen, about the price of timber to put up scaffolding, about payments (and attitudes) to the poor, about the visits of royal commissioners to humble parishes, about tenements and contracts and dining and sociability and ironwork and legal documents and parish officers and wages and Spaniards and burials and social status, and all that in one rather brief entry in one set of annual churchwardens accounts?  The possibilities are truly endless!

[4] Eamon Duffy, The Voices of Morebath: Reformation and Rebellion in an English Village (New Haven and London: Yale University Press, 2001).