This post speaks to the themse of our ‘On Periodisation’ series. The other posts are:

The idea of a ‘long eighteenth century’ in British history has only been around for a few decades, but it has proved powerful. It is regularly used in teaching and in research publications. It even has a popular seminar at the Institute of Historical Research.

This post is an attempt to offer a case against the ‘long’ eighteenth century as a period of study. For reasons that will soon be obvious, it should not be taken too seriously, but I hope it will still offer some food for thought. I hope it will also contribute to the wider conversation about historical periodisation that we’ve been having on this blog.

My argument today is two-fold:

The long eighteenth century is too long

The notion of a ‘long eighteenth century’ is, unless I’ve misunderstood, predicated on the idea that there was a moment of profound discontinuity in the second half of the seventeenth century. There was, my straw man might claim, a paradigm shift at some point in this period. According to this perspective, we can plausibly compare the 1690s to the 1750s in a way that we can’t compare 1690s to the 1650s.

The date chosen for the start of the long eighteenth century understandably varies depending on what one is studying. For political historians, 1688 or perhaps (at a push) 1660 seem to make sense. For religious historians, the Toleration Act of 1689 might work. For historians of the metropolitan built environment, presumably 1666. For historians of print, perhaps the expiry of the licencing act of 1695. 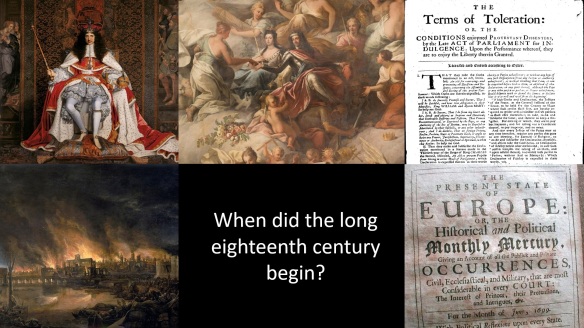 But of course we know that’s not true. As every early modernist knows, there were plenty of continuities across the seventeenth century – despite the revolutionary events in the middle and towards the end. Although many things changed, they did not change so much as to make analysis impossible.

So, what should we do about this?

Well the easiest answer is to cut the long eighteenth century down to size. While ‘sensible’ periodisation can be useful, it can also be limiting. I believe that the time has come to occasionally be more arbitrary in our periodisation.

I’ll give you one example from my own work. I’m currently leading a project – working with Sharon Howard and Jason Peacey – that looks at petitioning in seventeenth-century England. We decided at the beginning of this project to not end in 1660 or 1688 or 1714 or any other conventional point, and instead systematically collect data until precisely 1700. (Obviously we’re looking at some later stuff too, but that is our current cut off point for methodical data collection.)

This means that the project crosses the traditional divides that have sliced up the history of early modern petitioning, political engagement and state formation in the existing scholarship. Instead, we’ll have chance to how much impact the events of 1640, 1660, 1688 and so on, actually had on petitioning practice, rather than simply assuming a fundamental change.

The idea of a long eighteenth century was, in some ways, a rightly critical response to the popular tendency to ascribe meaning to round numbers such as 1700 or 1800. But using such numbers – while acknowledging their arbitrariness – is a good way to start thinking about continuities (and less obvious changes) across supposedly meaningful dividing lines such as 1689.

So, next time you’re researching the eighteenth century, maybe do something radical by starting in 1700.

The long eighteenth century is too short

The historiography of ‘early modern Britain’ has its centre of gravity somewhere between Henry VIII and Oliver Cromwell. There is, of course, mountains of excellent work on slightly earlier and later periods, but the big debates (and the big textbooks) have tended to work outwards from the ‘Reformation to Restoration’ period.

Meanwhile, the historiography of the ‘long eighteenth century’ obviously has its centre of gravity somewhere in the eighteenth century. Again, lots of long-eighteenth-centurists have said interesting things about the late 17th or early 19th century, but they tend to be engaging with debates that began with a focus on ‘Georgian Britain’.

What that means is that there is not nearly enough conversations that actually stretch across the ‘early modernist’/‘eighteenth-centuryist’ divide. Yet there are so many important historical theme and topics that make more sense when considered across a longer period.

For working people, there was no clear transitional moment in the late 17th century when we look at ‘real wages’. For men, real wages were basically flat c.1600 to c.1800. For women, real wages improved c.1600 to c.1750, but were declining or flat thereafter. So, when thinking about the economic circumstances of most people, 1600 makes more sense as a transition point than 1660 or 1690 or any other late seventeenth century date. 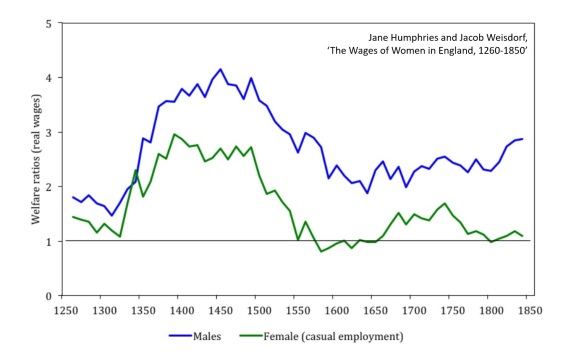 For print culture, again, the obvious transitional moments were earlier or later, at least when looking at the number of titles published. The lapse of the licencing act in 1695 seems pretty anti-climatic when compared to the massive shift in the 1640s or even the beginning of rapid expansion from c.1750. 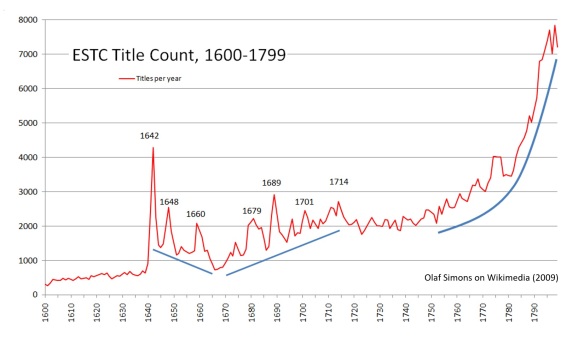 Finally, for the very poor, it is particularly difficult to find a transitional moment in the late seventeenth century comparable to earlier and later changes, when looking at the structure of the relief system. The famed Elizabethan Poor Laws of 1598 and 1601 set out a legal framework for parish-based relief that continued for over two hundred years until the passage of the New Poor Law in 1834.

Yet the historiography of the Old Poor Law in England has, almost without exception, been produced either by ‘early modernists’ like me whose analysis trials off around the 1720s or, even they are feeling ambitious, the 1780s. Or it is produced by eighteenth-centuryists who begin in 1662, or 1690, or 1723 (Workhouse Test Act) and end in the 1830s. And I think this can be extended. Beyond parish relief, local governance in general makes much more sense when we consider the seventeenth and eighteenth centuries together.

More generally, I currently have three doctoral students – Sarah Birt, Charlie Taverner and Anna Cusack – working on various aspects of metropolitan history, all of whom start in the early seventeenth century and end in the mid to late eighteenth century and all of whom are carving out new narratives as a result.

So, what is does this mean for your research and teaching? I think two possibilities are worth considering.

First, you should embrace arbitrary periodisation. There’s nothing wrong with starting a study in 1700 or 1750 or 1800. Using these dates both acknowledges the arbitrary nature of periodisation while allowing us to see more clearly what actually changed – or not – at these moments of presumed transition.

Second, you should all study the seventeenth century. For lots of things, studying both centuries together makes much more sense than trying to find a meaningful starting point in the late seventeenth century. Early modernists and eighteenth-centuryists need to stop assuming that there was a meaningful break in 1660 or 1688 or 1714 and start working together to track longer term developments that cross these traditional divides.

[This post is a lightly edited version of a presentation at ‘Eighteenth Century Now: The Current State of British History’ conference held at UCL on 26 April 2019. I’m very grateful to the organisers – Esther Brot (KCL), Joseph Cozens (UCL), Sally Holloway (Oxford Brookes) and Miranda Reading (KCL) – who put together such a stimulating event. You can get a taste of it on twitter via #18thCNow.]

7 thoughts on “Against the Long Eighteenth Century”