This guest post comes from Danae Tankard, a Senior Lecturer in Social and Cultural History at the University of Chichester. It follows on from Mark’s recent post on ‘Material Culture from Below’ and further demonstrates the potential of court depositions for examining the material culture of the lower orders in early modern England – here, their clothing. It provides an introduction to Danae’s broader body of work on the clothing of the rural poor in seventeenth-century England. You can follow Danae @morley1640.

Yet with that and such like words I made shift to buy me some clothes, and then I went to church on Sunday, which I never could do before for want of clothes to go handsome in.  My father being poor and in debt could not provide us with clothes fitting to go to church in (so we could not go to church) unless we would go in rags, which was not seemly.[1]

This passage is taken from the autobiographical writings of Edward Barlow, the son of an impoverished husbandman, born in Prestwich in Lancashire in 1642.  Written retrospectively when Barlow was a thirty-one year old seaman and had learned to read 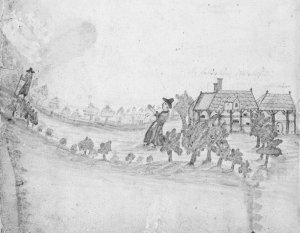 and write, it describes the period leading up to his first departure from home aged twelve or thirteen.  Since his father could not afford to indenture him as an apprentice, Barlow worked for his neighbours, harvesting and haymaking and carting coal from the local coal pits, for which he received ‘but small wages’ of about two or three pence a day.[2]  By making ‘shift’ he was able to buy himself some clothes to ‘go handsome in’ to replace the ‘rags’ that he had worn before.  The significance of these new clothes in Barlow’s account is that they allow him to attend church, something he could not do before ‘unless [he] would go in rags, which was not seemly’.  His description of his clothing as ‘rags’ may be an exaggeration but it enables Barlow to express his sense of shame at having nothing decent to wear to church.  However, Barlow does not want just any clothes: he wants clothes ‘to go handsome in’.  In other words, he wants to look good. END_OF_DOCUMENT_TOKEN_TO_BE_REPLACED

I went to a conference, and all I got was this lousy blog post.

That’s right, this is one of those blog posts thought up whilst staring pensively out of a train window on a journey home from three days at a wonderfully stimulating and sociable conference – in this instance, on ‘Gender, Power and Materiality in Early Modern Europe’, at the University of Plymouth. Back in April. Of 2016. Still, better late than never. 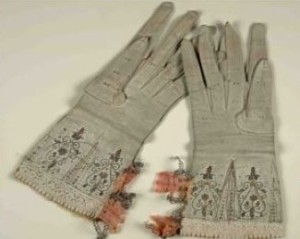 Gloves: they fit the conference theme

I signed up for said conference, despite my lack of familiarity with the field of early modern material culture studies, to try out a paper on the spatial division of labour in rural England, 1500-1700, based on material coming out of the Women’s Work Project. The paper went well enough, and over the course of the conference as a whole I learnt a huge amount about the material culture of the period, and about the sophisticated methodologies used by the reflective practitioners of material cultural history. It whet my appetite for the study of material culture. But it also left me hungry for more of a particular type of material culture history – one focused on the common people of the sixteenth and seventeenth centuries. In what will come as no surprise to readers of this blog, I wanted more material culture ‘from below’.

The conference offered a rich diet of papers focused on the gentry and aristocracy of early modern Europe, but was light on the material things that populated the worlds of their social inferiors. Not for the first time as a social historian I found myself experiencing ‘modernist envy’, as my mind turned to examples of research into the material culture of the working class in the industrial age – Ruth Mather on working class homes in the period 1780-1830; Julie-Marie Strange’s focus on ‘father’s chair’ as a way into the domestic relationships of the Victorian working class; Carolyn Steedman’s wonderful essay on the meanings of a rag rug.[1] And how about the insights into working class material culture to be gleaned from Lark Rise to Candleford? END_OF_DOCUMENT_TOKEN_TO_BE_REPLACED